A day with the masters...

A day with the masters... 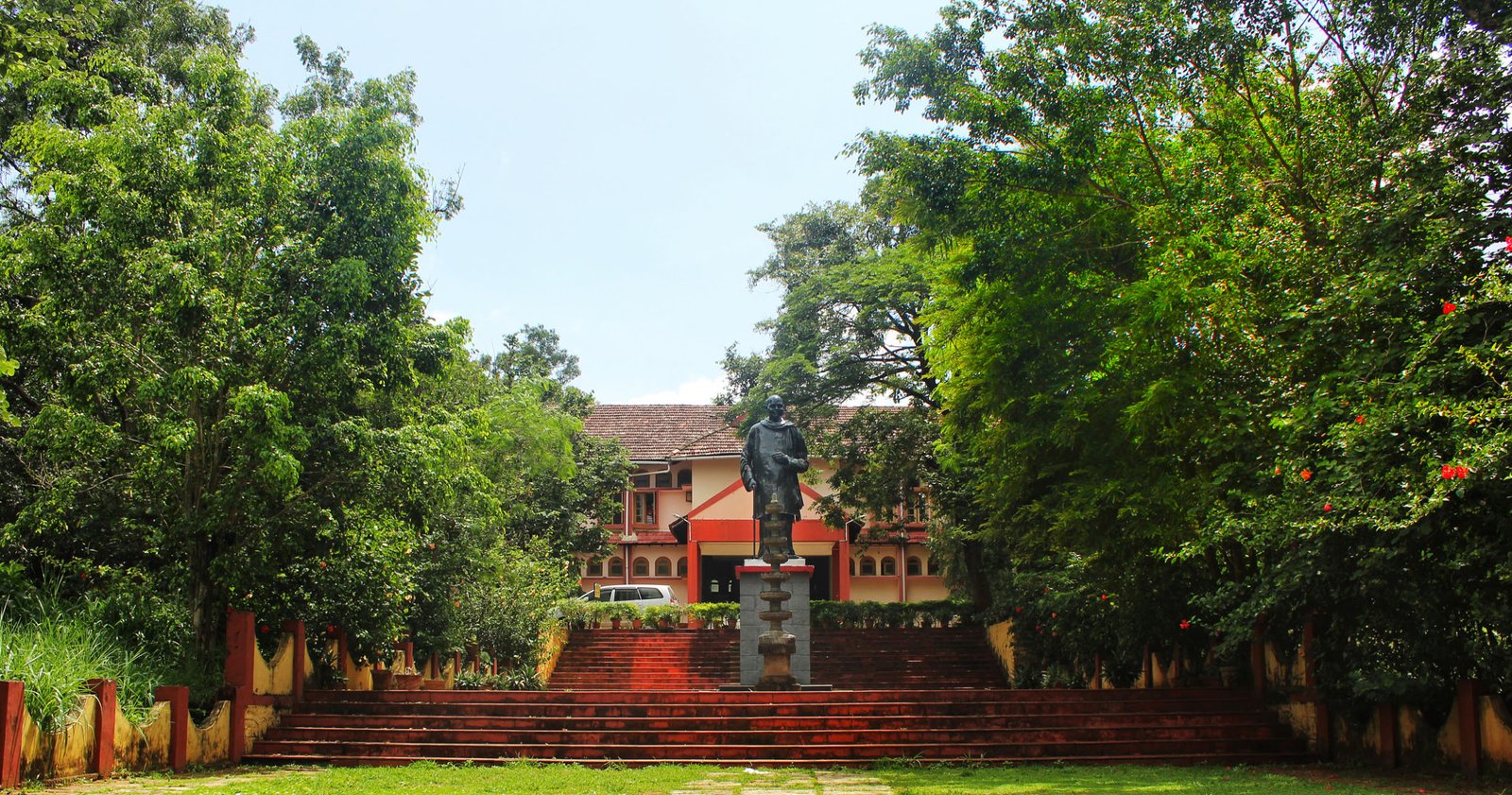 A DAY WITH THE MASTERS’ AT KALAMANDALAM

A Day with the Masters’ is a pilgrimage to Kalamandalam - the most sacred temple of arts, giving a world class experience to the visitors, with an unique menu of presentations that truly bring out the grandeur of the institution. This premier cultural tourism initiative is jointly promoted by Kerala Tourism and Kalamandalam.

Cheruthuruthy, located on the banks of Nila river, in the Thrissur district of Kerala, the seat of Kalamandalam, is renowned the world over for its Kathakali training centre. Beasides being a major centre for Kathakali training, Kalamandalam also imparts training in other performing art forms like Mohiniyattam, Koodiyattam, Thullal, and Nangiarkoothu. Training in vocal and percussion instruments are also conducted here. Many of the internationally renowned artistes of Kerala have been trained here.

The Kalamandalam and its surroundings reflect the simple, pure and ethnic atmosphere in which these arts have survived for centuries. The Koothambalam - the traditional dance theatre at Kalamandalam is the only one in Kerala which is built outside a temple complex. This theatre is 14.62m long and 7.31m wide and has four wooden pillars supporting it. It has three main parts - the Aniyara (green room), the Rangam (stage) - the space in front and side of it meant for the audience, and the Mridanga-Patha (where the percussion instruments are kept).

The Kalamandalam was established by Mahakavi Vallathol Narayana Menon, the renowned Malayalam poet in the year 1930. It was a time when the popularity of Kathakali was on the wane. English education had been introduced and only a few upper class families in the state held the key to the art form. Realising the need to keep the art alive, the poet along with a few royal Kathakali enthusiasts like M. Mukundaraja and Kunjikuttan Thampuran, took over the revival and popularisation programme. They arranged performances by eminent artistes across the state and even raised funds through lotteries.

Kalamandalam was inaugurated in November 1930 at Kunnamkulam, Kakkad, and was later shifted to the village of Cheruthuruthy, just south of Shoranur in 1933. The Maharaja of Cochin donated land and a building. Subsequently, a dance department was started to revive Mohiniyattam. Kalamandalam has been functioning as a grant-in-aid institution under the Cultural Affairs Department, Government of Kerala. In 2006, the Kalamandalam was accorded the status of ‘Deemed University for Art and Culture’ by the Government of India. In 2010, University Grants Commission of India has awarded ‘A’ category status for Kalamandalam. Kalamandalam is the only deemed university in Kerala state accorded the prestigious status.

Over the years, this unique institution has imparted training in Kathakali, Mohiniyattam, Kootiyattam, Panchavadyam, Thullal and other Kerala art forms, following the ancient gurukula system of education.

Koothambalam (Traditional Temple-Theater) Koothambalam or Natyagriha has for long been part of Kerala’s temple-heritage. Only a few major temples have retained Koothambalams. The traditional Koothambalams were built in accordance with the principles laid down in the Natyasaastra (The ancient Indian dramaturgy) of sage Bharata. Completed in 1976, Kalamandalam Koothambalam has traditional architectural elegance coupled with the imagination of a renowned architect and art connoisseur, the late D. Appukkuttan Nair. The pillars of the Natyagriha are made of granite. The roof-structure, the stage-floor and its pillars are made of teak-wood and rose-wood. On the granite pillars are inscribed one hundred and eight karanas (dance-poses) dealt within the Natyasastra. There are two dressing-rooms behind the stage. Traditionally Kuttu and Kutiyattam were performed at the Koothambalam. In the architecturally exquisite Koothambalam, there will be variety programmes on special occasions. Watching recitals at the Koothambalam is a delightful experience.

The Art-Gallery The Art-Gallery at Kalamandalam has neatly exhibited elegant statutes of different Kathakali characters and those of other performing arts. The statues are in fiber conceived and created by the renowned artiste Namboodiri. The outer walls of the Gallery have beautiful mural paintings by artiste Suresh and his colleagues of the Vaasthuvidya Gurukulam, Aaranmula. The costume-room has a wide variety of colourful costumes, head-gears, wooden masks and wooden weapons used by the Kathakali and Koodiyattam characters.

For art-lovers and cultural-enthusiasts, there is much more to see at Kalamandalam. The Vallathol-Museum at Cheruthuruthy showcases the poetic works, cultural contributions and achievements of Mahakavi Vallathol  (The great poet Vallathol) over a long period of time. The Vallathol Samadhi where his mortal remains lay interned is situated in the old Kalamandalam campus. The main-building in the old campus is converted into Portrait-Gallery. Here portraits of the great artists of yore in oil painting adorn the four walls. Most of them had played commendable roles in the formative years of Kalamandalam. In the Gallery there you can find countless mementos and plaques Kalamandalam received for the Kathakali, Koodiyattam and Mohiniyattam recitals held in the international dance, drama and music festivals all over the world.

The Vallathol Museum Years back, the Vallathol house at the Cheruthuruthy village was taken over by the Government and handed over to Kalamandalam. The house has been converted into Vallathol Museum which exhibits among others the precious manuscripts, gifts which the poet received from various countries, the different dresses he used on various occasions, photographs of Vallathol with luminaries from all over the world and the audio-version of his select poems. The museum-building has been renovated and the display has been redesigned with architectural eloquence. A visit to Vallathol Museum has now become a cultural pilgrimage.

A Day With the Masters’ package consists of the following:

The following details may be noted while attending the tour: The tour will begin at 0930 hours and end by 1300 hours on all working days.Booking for a maximum of 30 members per day will be confirmed. The restriction in number is to ensure that the tour does not interfere with the artistic and academic atmosphere.

The Group will be divided into 3 sections of 10 members each. There is no minimum size for a tour. The tour will feature Kalamandalam staff as Guides.

In the lattr part of the tour, one or two Gurus (masters) may also join the tour to interact with the visitors. It is assumed that the visitors will arrive in their own vehicles by 9.15 a.m and they will travel to the old campus (2 km) in their vehicles. However, there will be arrangements for transporting visitors without own transport too.

All visitors are welcome to take still pictures. There will be no extra charges for cameras. However, care should be taken not to disturb the classes. Photographers should not ask the teachers or students to pose for pictures. Professional photographers have to take permission, and there may be extra charges.

Umbrellas will be provided on request on a first come, first served basis.

Some Kalaris may not be functional on some days, for a variety of reasons.

Visitors may be advised to wear sandals or slippers, for ease of removal, as footwear is not permitted in the kalaris.

The tour is priced at US$ 20.00 per head for foreign nationals and INR 1,000/- per Indian national, inclusive of taxes as applicable.

The tour won’t be available on Government holidays and other declared public holidays.

Kalamandalam will be closed for examinations and summer holidays from the third week of March and the tour will not be available during the summer vacation (April-May). Bookings will reopen from the month of June. The school will also be closed for 10 days during Onam holidays in the month of September and 10 days in December for the Christmas holidays.

Kalamandalam holds recitals of Kathakali, Koodiyattam, Mohiniyattam, Thullal and so on for tourists, artists and international students. Those who are interested in commissioning performances in our Koothambalam may contact Registrar, Kerala Kalamandalam, for details on fee and other expenses to be remitted. For single recitals and for package-programmes there is change in the rate of fee charged. The performance will be for maximum three hours from 6 or 6.30 P.M. Kalamandalam welcomes contributions from philanthropists. All donations and contributions should be made in the name of Kerala Kalamandalam, and a receipt will be given. Please contact the Project Executive for further details.