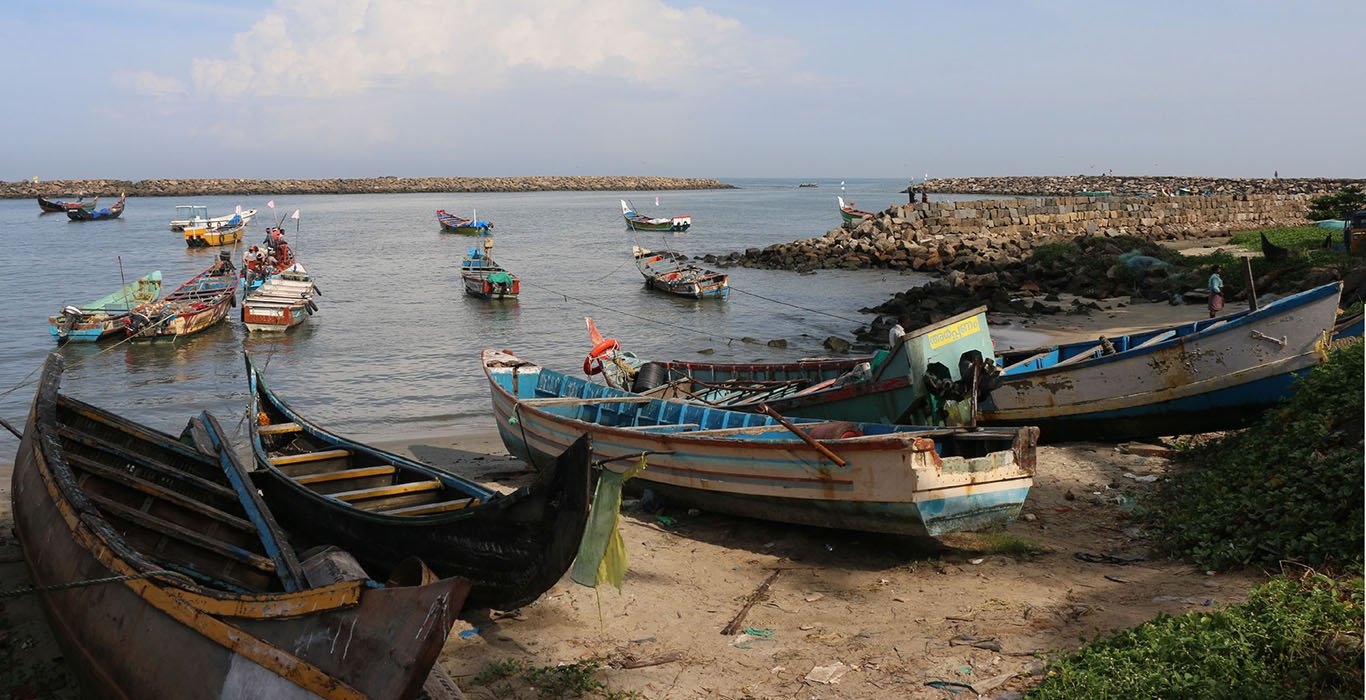 A Hidden Treasure Near Kochi

The weekend exploratory forays into little known places in and around Kochi would get the intrepid traveller to discover many hidden treasures in close proximity to this expanding metropolis. One such is the Chellanam fishing harbour. The venturesome among the city-travellers who do not go by rough guides, but would rather follow their own instincts will always been pleasantly surprised and make some amazing new discoveries over those relaxing drives out of the city

Being one such explorer with an innate wanderlust, recently I travelled to the Chellanam Fishing Harbour with the basic aim of getting a fresh catch of prawns. It would pertinent to share with you all that there is a sea of difference in the taste, texture and general eating experience of preserved, refrigerated fish meat and freshly caught fish. Though the expedition to the harbour did not yield any prawns that day, I ended up being treated to an unknown and enlightening experience worth narrating. I got my first glimpse of the bustle in the life of a quite fishing village in the Kerala backwaters.

It was a fascinating lesson in deconstructing the manner in which many common food items that we take so much for granted, actually takes laborious efforts to finally find its way to us. On the shores of that harbour I learnt about the astonishing odyssey that a fish from the distant ocean makes on its journey to our plates and mouths.

For the sake of their livelihood the fishermen risk their lives in small fishing boats as they set out into the raging seas and often times end up spending days in a lonely watery wilderness, where only the merge of the sky and the sea on the distant horizon is the sight that  stares back at them. They are forced to wait to have an adequate catch that will make the expenditure on their trip worth it and warrant the return to harbour. In the deep seas as they drag their nets, the fish from the oceans gets surreptitiously snared into their traps and are hauled overboard to an unfamiliar waterless world, usually a hard wooden floor, which is where they spend the last few struggling moments of their existence, gasping as life slowly ebbs away and they get buried en masse in their icy graves made in huge plastic tubs. The fish is then hauled overshore where the auction eers take over and once sold, it changes hands with the trader who has bought it. He then resells it to the retail fish-sellers who buy it from them and transfer it to their respective aluminium vessels, buckets, bamboo baskets, plastic tubs or thermocol packs as the case maybe. The catch is then briskly transported on human heads, old rusty bicycles, or mopeds, pickups, autos, trucks and so on to make its way out from the harbour to the local markets or the fisheries for further processing. The fish then changes hands with fish-mongers who set up shops in busy neighbourhoods, where the retail consumers flock for their daily buy of fish. Here the buyer pays money to the fish-monger and takes the fish home to either have it cooked readily or have it refrigerated for later use. The fish at home gets to the hands of the cleaner who cleans it and sets it up for the person who cooks who will prepare the dish that will travel to the dining tables in serving dishes, which will then finally be eaten by the end consumer over a hearty meal. Thus ends the journey of that unfortunate fish that was trapped in the ocean a few days back, hundreds of miles away from where it is being ultimately consumed. You will agree that it was quiet a fascinating journey that the fish had made to find its final resting place in human tummies

I always make it a point in my travels to new destinations to strike a polite conversation with ageing locals. If only to get a share of their wisdom and perspective on life as they narrate the local gossip, the must dos for the place, the taboo topics, best brews the place is famous for, where to eat and what to eat there, the best things to shop and where to buy what and at what prices etc. So I got talking with Mammukka an ageing fisherman whom I had chanced upon at the busy and only tea-stall on the beach. He turned out to be a man of few words therefore less gossipy and more professor-like and factual. He told me that the harbour was born out of a persistent demand from local fishermen for a fishery harbour, which provided a tranquil basin with safe entry conditions. This fishing gap was a man-made creation which lies in between two seawalls which were recently built to stop the rapid sea-erosion this area was earlier prone to. The Chellanam Fishing Harbour is located in the Kandekkadu gap of Chellanam Panchayath of Ernakulam District along the Thoppumpady-Chellanam State Highway which is 8.5 km from the NH 47 Eramalloor Junction. The nearest railway station is Thuravoor, which is 6 km south of the place. This waterfront is fabled to be rich in fish because there are shifting mud banks that are often formed by the synergy of rapidly changing current patterns and tidal activities. He also told me there were about 200 motorized valloms and 15 inboard valloms operating from there. The maximum number of fishing days in a year here is only 120-125 days. The local fishermen are therefore forced to take up alternative employment to keep themselves busy for the two-thirds of the year that they remain out of the sea. So we have many multi-talented fishermen who also double up as singers, movie-extras, band players, barbers, mechanics, salesman, cooks, waiters, butchers, cobblers, tailors, auto and taxi drivers etc

All destinations have their own stories to tell and Chellanam is no different. Kochi and its proximity to the seacoast have many other such fascinating less-visited destinations waiting to be discovered by the more curious among us. I am looking forward to discovering and sharing another such story in a future edition. Meanwhile a visit to Chellanam is well worth it as one comes away with the freshest catch money can buy.