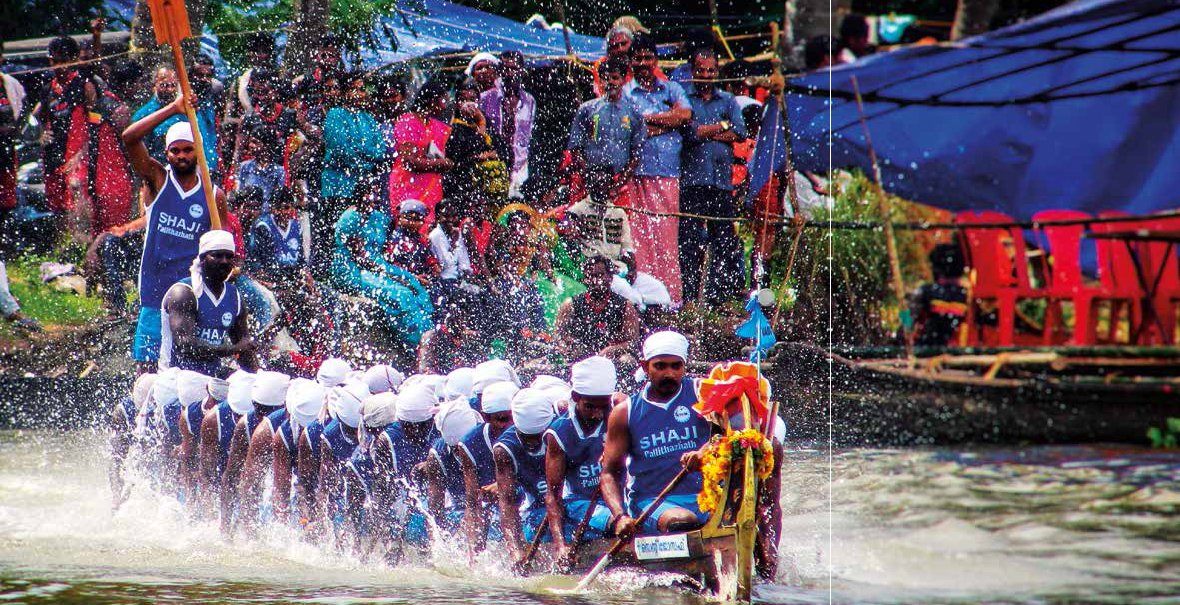 The mesmerising rhythm of “Vanchi Paatu” (“Vanchi” means boat and “Pattu” means song) reverberates all over Kerala during onam. God’s own land, full of backwaters, rivers and lakes, hosts a number of boat races around onam. Though the significant ones are clustered in and around central Kerala, almost every place of reckoning with a suitable water body hosts this amazing local sport called “Vallam Kali” (“Vallam” means Boat and “Kali” means Game or competition). Comparable to the Olympic hundredmeter dash, the sport is not just about a few boats, each unendingly long and slender, darting over a vast expanse of water, powered by a multitude of oarsmen, all paddling in unison to the rhythm of a traditional song and then suddenly exploding in celebrations of victory. Each boat contests the race with a reputation to live by or a defeat to avenge and the event is an amalgamation of a local tale, belief, traditions, music and test of physical endurance, all soaked in spirt of competition. Feast to the eyes, full of colour and enthusiasm, this sport magically draws locals and  visitors to instantly fall in love with it.

With more than 50 snake boat races conducted in Kerala during August- September, there’s no better time to travel to the state for water sports enthusiasts

One doesn’t have to be a competitor to experience the thrill. Mere presence in the spectator gallery is enough to push one to own a team, root for it and experience the rush of adrenaline. The sound of countless oars cutting the still waters in tune with the beat of the “Chenda”, the frantically swaying oarsmen and the cheering crowd sets the stage for one to be elevated to a surreal state never experienced before. The end could be sheer ecstasy or broken heart but the ease with which one can experience sublimity is unique to Kerala’s Vallam Kali. Classified under various names, depending upon the length and shape of bow and stern, each boat is a piece of art. Sculpted as per “Sastras”, by master craftsmen, these boats are legends by themselves. Some are even considered like deities, necessitating rituals and practices which have to be strictly adhered to. “Chundan-Vallams, “Churulan – Vallams”, “Iruttukuthy Vallams”, “Odi-Vallams”, “Veppu-Vallams” and “Kochu-Vallams” are some common classifications.

Comparable to the Olympic hundred-meter dash, the sport is not just about a few boats, each unendingly long and slender, darting over a vast expanse of  water, powered by a multitude of oarsmen, all paddling in unison to the rhythm of a traditional song and then suddenly exploding in
celebrations of victory

Though each one is beautiful in its own right, Chundans stand apart because of its imposing height that towers 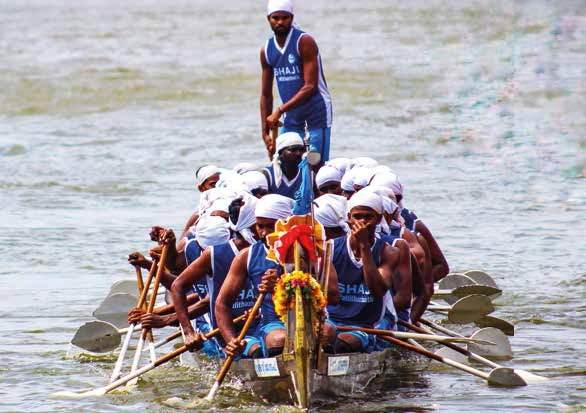 over the water and its unbelievable “sleek-length” that allows it to carry more than hundred oarsmen besides those required to steer the boat and coordinate the rowing. Others are smaller thereby restricting the number of oarsmen. Yet most of them carry about fifty to sixty oarsmen besides others required for steering and coordination. Over a period of time, these boats have come to be known as “snakeboats”, probably because of its length and hood- like bows. Some of these also find mention in various books of records. Unlike the dragon boats of Chinese which are carved out to look like dragons, snake boats have no resemblance whatsoever to any snake. It is believed that these boats were initially conceived as Warrior boats but as the princely states  amalgamated to form the union of India and internal walls and strives became a thing of the past these boats found better application and thus was born the concept of boat racing. Annual maintenance of the boat consists of thorough scrubbing and cleaning besides application of a paste made of soot mixed with eggs besides various types of oils including sardine oil. This, it is believed, would reduce friction and help the boat slice through the water. These boats are not normally used for any purpose other than racing or carrying the deity associated. The boats are normally unveiled after prayers and rituals on specific date as per Malayalam calendar and at the auspicious times fixed for the purpose. The oarsmen are carefully selected and put to extensive practice before the actual race.

Prominent amongst the boat races

Nehru Trophy Boat Race, Punnamada lake, Alappuzha.
First conducted in 1952 as an impromptu competition in honour of visiting Prime Minister Pandit Jawaharlal Nehru this event is world famous. Impressed with this amazing sport, Mr Jawaharlal Nehru instituted a personally signed silver trophy with the inscription “To the winners of the boat race which is a unique feature of community life and Travancore Cochin”.

Utharaatadi Boat Race at Aranmula, Pathanmthitta.
Revered, this boat race is backed by an interesting legend. It is said that a devout Brahmin had promised to deliver the requisites for the onam feast to the Aranmula Parthasarathy Temple. While his boat was on its way to the temple, it was attacked by enemies. The locals came out in their boats to ensure safety of the temple goods. The race is thus considered as a celebration of the success of good or evil. The boats used in this race is called
“Palliodams”

Payippad Jaloltsavam in Payippad River, Alappuzha.
This three-day race is conducted to commemorate the discovery of an idol of Subramanya and its ceremonious journey from the place of discovery to the temple at Harippad.

Champakulam Moolam Boat Race, Pamapa River, Champakulam, Alappuzha.
This race also is conducted to commemorate the installation of the idol of Lord Krishna at a temple in Ambalappuzha. It is also referred to as ‘Moolam Vallamkali’ because the race is conducted on the “Moolam” day in the
Malayalam month “Midhunam”, the installation day of the deity at the Temple.

Sree Narayana Jayanthi Vallam Kali, Kumarakom, Kottayam.
This race is conducted in to commemorate the consecration of the ideal of Sri Balasubramaniam at the Kumaramangalam temple by Sri Narayana Guru in 1903.

These boats are normally owned by the community and are generally named after the community or “Kara” (River Bank). Thus “Karuvatta Puthen Chundan” represents a place called Karuvatta and “Payippad Chundan” represents a place called Payippad. Likewise, each boat carries a name that its owners are extremely proud of. The crew of boat for the competition, in olden days, used to be from within the community only. Now that Keralites have gone all over the world in search of jobs, finding oarsmen from outside has become a necessity. However, the practice of taking care of the crew during the season still remains within the community.

Although organisers of all “Vallam kali”s would like to call their respective events as a major event, based on the scale of conduct and participation some are considered prestigious. Most of these attract large-scale participation and have found themselves in the international tourist map.  These races are held in reverence to local beliefs or as commemorative events, lending a sense of divinity or historical value.