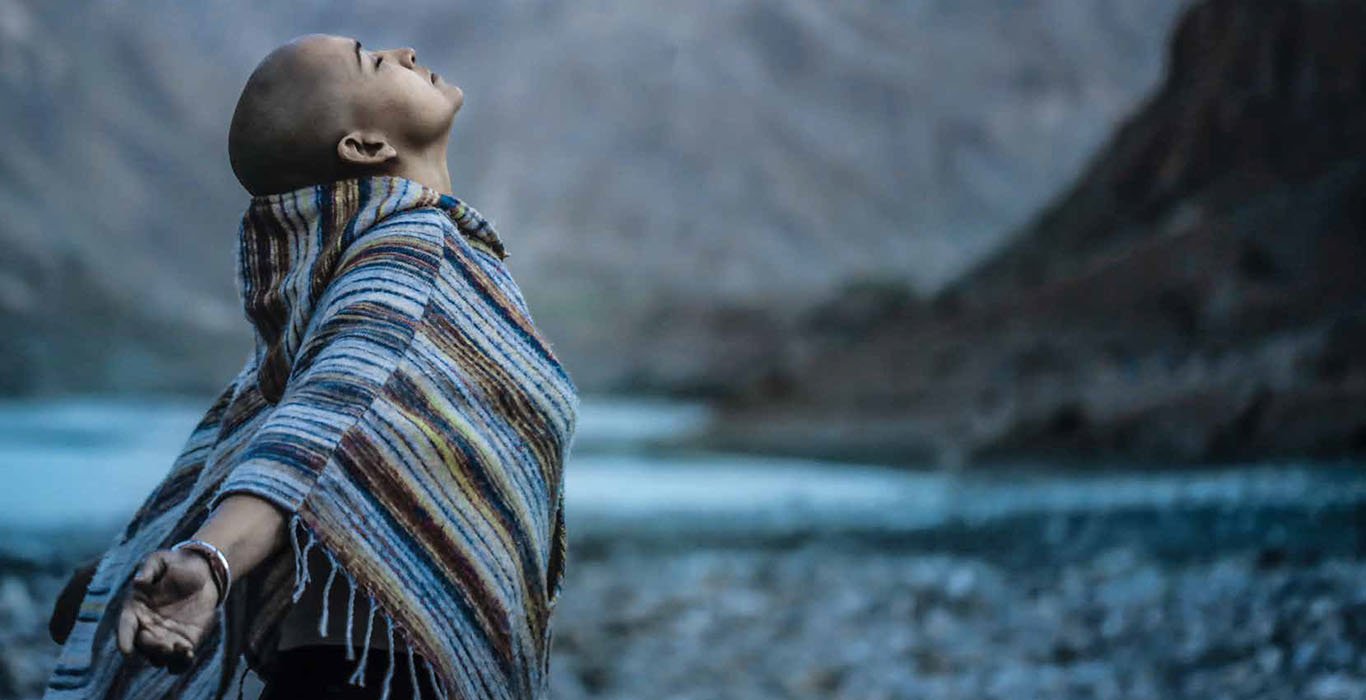 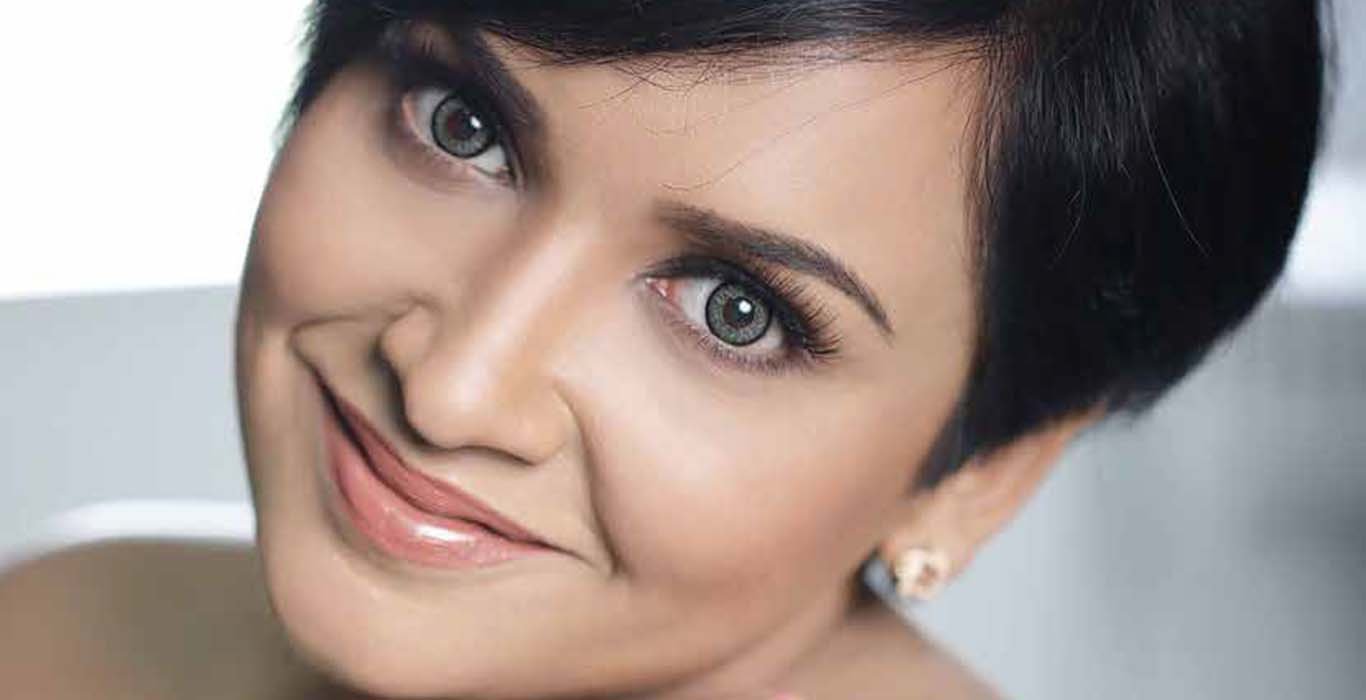 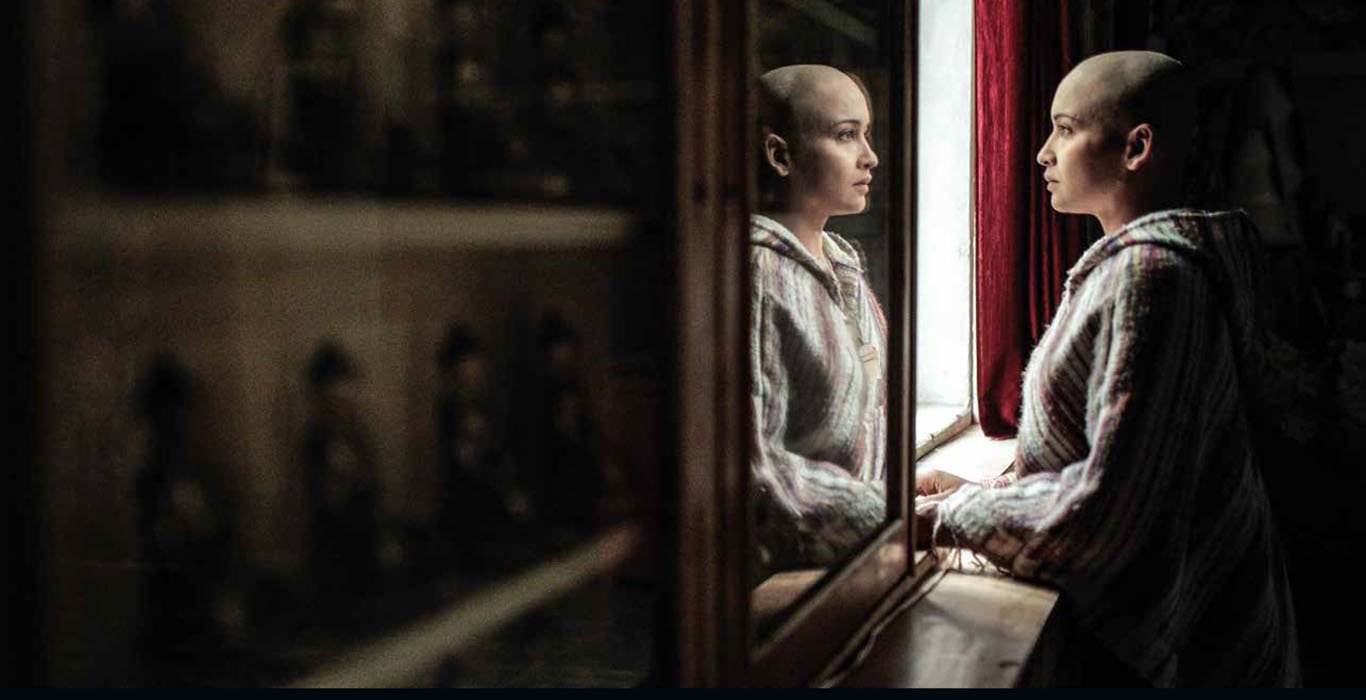 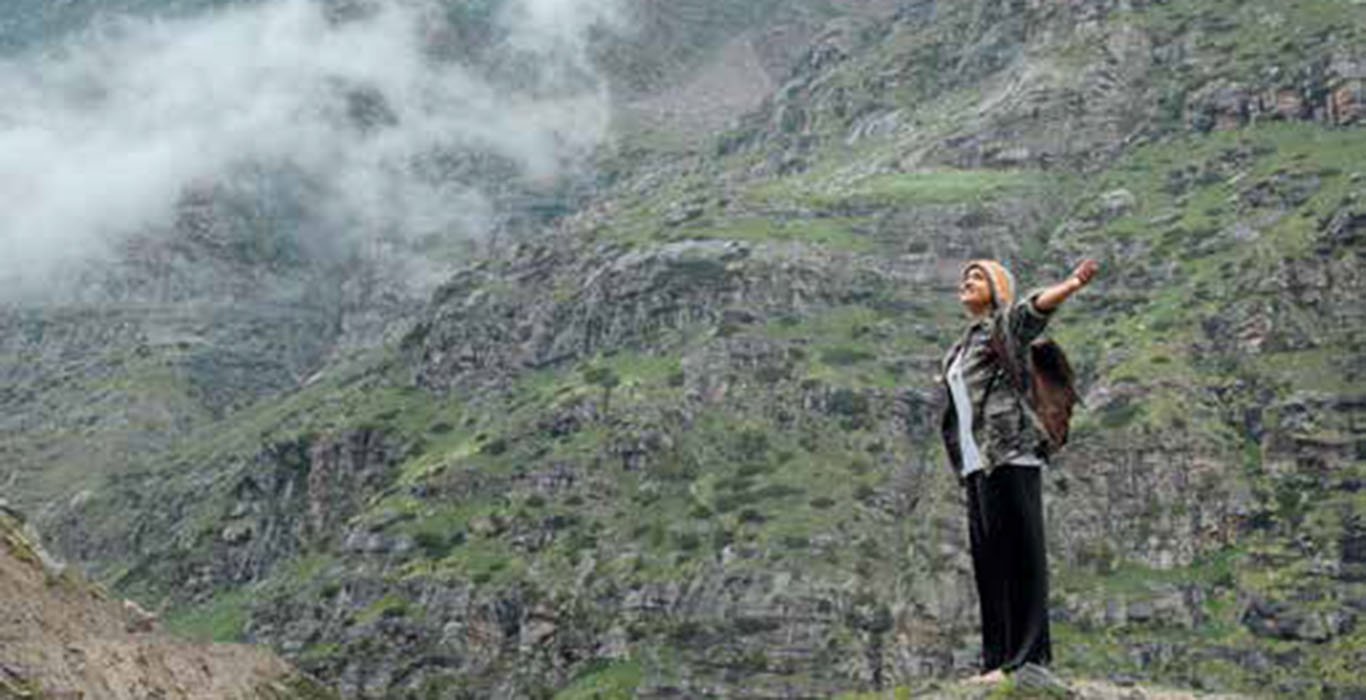 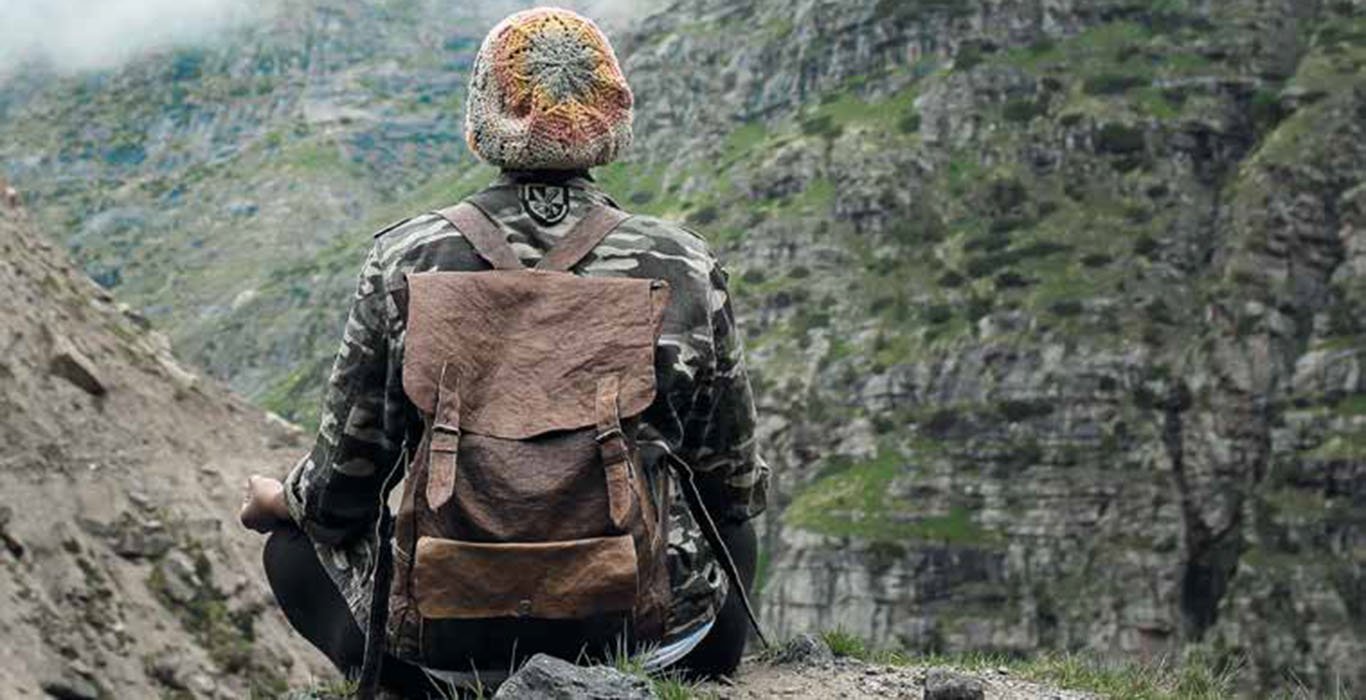 Lena’s second name might as well be non-conformist. Try to pigeon hole the pretty actress into a slot and the chances are that she will never fit there. Her roles have been far too varied and diverse and she wants it no other way. Character roles or the lead is immaterial to Lena; she will not do something just because others are doing it but would rather carve her own path, be it in her personal or her professional life. She is aware of her strengths and plays it up and for someone who called herself an outsider in films; clearly she is an insider now more in love with films and life than ever before. She completes two decades in films this year acting in Tamil, Telugu and Hindi sharing screen space with Dhanush and Akshay Kumar. The actor recently fulfilled two of her greatest wishes – to shave her head and to take off on a solo trip to the Himalayas. She has returned back with a wealth of experiences to narrate and KTE listens in to what she has to say.

Your entry into M’ Town?

My journey started with Jayaraj sir’s Sneham in 1998 when I was just fifteen. As a child, I was always in love with acting and would actively take part in school dramas and plays. I remember telling my mother that actors are so lucky that they could get to be so many different people – a lawyer, a doctor, a policeman etc. That, to me, was the underlying interest in acting- that actors could live so many different lives. Coincidentally that interest helped me get a start through Sneham because my school principal was a friend of Jayaraj’s and she suggested my name. The makers wanted someone who was 15- 16 to play Jayaram’s younger sister and since I was the drama queen in college, I was the obvious choice. So you can call  my entry into films as accidental. But I also believe that there are no accidents – only incidents. One incident leads to the other. The second film I acted in was also Jayaraj sir’s Karunam. Since I was serious about my studies, I could not take up all the roles that came my way that time.

What did working with the top directors in Mollywood teach you?

Right from the beginning of my journey, I got to work with the renowned names. That helped me in setting a solid foundation for my acting career. I acquired a good knowledge about the industry and that helped, because no one in my family has any link to films. Working with MT, Sibi Malayil, Lal Jose, Sathyan Anthikad among others significantly honed my talent.

Why did you take a break at the peak of your career?

When I fell into the heroine slot, it dawned on me that this was not something I wanted to do. The rationale I gave was that films were not a stable career but the real reason was my studies. I was a state rank holder and felt I had to continue my studies. So I left to Mumbai to study further and that was the best decision I took. I was in the industry since my school days and if I had not left to study in Mumbai, I would have been just an ‘industry child’ knowing nothing about the outside world. In Mumbai, I got to live on my own and also got to amass a lot of life experiences. These experiences enriched my acting prowess when I returned back to films. Yes, I left for Mumbai at my peak, when I was getting good heroine roles. But I have never regretted that decision since those three years have added life to my acting span. Those years made me more mature as an actor.

I did my post graduation in clinical psychology. Later I realized that it was not truly my calling since I found it a little too overwhelming for someone as sensitive as me. That was also when I realized I had been doing exactly what I wanted and I realised how much I missed acting. I complete 20 years of acting this year.

Making the jump to serials?

I was approached for the serial Omanathinkal Pakshi and I rationalized that my love was for acting and playing different characters. I should not be concerned about the medium. So I decided to begin my second stint in acting with that serial. Acting in serials gave so much time to polish my character since I was working for years on the same character. The serial also made me a household name. Then once again I got back to cinema and one role followed the other. I, who had always considered myself as an outsider in cinema, started feeling more at home and gradually I realized that the film industry is my extended family and I enjoy being in this family. Slowly I moved to Tamil, Telugu and Hindi films and now it is a total of 97 films. You are not someone who believes in playing only the lead. Your character roles, including mother roles, have been widely appreciated.

As far as I am concerned, it is the challenges and the variation in roles that pulls me. I am someone one who gets bored easily, so I do not enjoy repetitions. I realized that a heroine was a typical character and always playing the heroine was a repetition. I love playing character roles because it gives me a wider range to explore. Now people call me for characters that require ambiguity because they cannot figure out if I will be good or bad. It is a nice and flexible space to be in where I also play varying ages. As an actor, being in a character role lets me explore more and I also get to learn more skills. I strongly believe an actor is his own tool. It has been a wonderful twenty years and I feel younger than ever.

Looking glamorous and lovelier with each passing day?

I am like the curious case of Benjamin Button where I age in reverse. On a serious note, when I was younger, I was this studious and non – adventurous kind. Even as a teenager I was very mature. From ages 25- 26, I started getting younger in my mind so my way of thinking changed and when that happened, my looks changed. Right now I am in a space where I am exploring life moment by moment and that is showing in terms of health and body language which comes from spirituality and meditation.

I was in the industry since my school days and if I had not left to study in Mumbai, I would have been just an ‘industry child’ knowing nothing about the outside world.

Shaving your head and heading off to the Himalayas?

I had always wanted to shave my head. Being a girl, generally no one encourages that. Another factor was that it would affect the continuity of my films. But this time around, I could feel life change; I felt reborn and decided to do it. What worked in my favour was that I had completed all my projects. So I took a break for three months, shaved off my hair and went off to the Himalayas. It was a solo journey of two months. I was in Nepal, the Eastern Himalayas and then the Western Himalayas through Himachal Pradesh. Travelling alone is so awesome and it was really roughing it out. You realize that life takes care of you if you trust it and I have been living on trust for a large part of my life. Suddenly everything falls into place and you are at the right destination at the right time and things move perfectly without glitches. I have become more of a witness than an ‘experiencer’ of life.

A surreal experience during your travel?

I was in the Western Himalayas where director Jithin Lal who was doing a music video called me up and asked if I could be a part of that because my look suited the video. The shoot was in Spiti valley. I was already in the vicinity and the theme was interesting so I committed to that. Funnily, for all the 50 days of my solo trip, I faced no glitches even during hard trekking. But when I was with the music group, our jeep got stuck in a frozen waterfall. Suddenly, I see a lot of familiar faces and I had not seen anybody familiar for 50 days. So in the middle of nowhere, I see Prithviraj there and he says ‘Of all the places, I see you stuck here‘ and that was so hilarious. The whole movie crew of 9, of which Prithviraj is the hero, were there after finishing their shoot in Spiti Valley. They helped us get the jeep out and Prithviraj helped arrange my stay and further transport. That is the family feeling I told you about- you feel like you belong to a huge family. I think it comes with the number of years I have been here. That was a wonderful incident. I guess I am used to miracles and magic by now.

The most challenging part of your solo trip?

The Anapoorna circuit trek from Nepal was the most challenging one. For hours and hours you are just walking through snow capped mountains, cold air, fresh breeze and so much of natural beauty- all with no one around. There were moments when I walked for hours and hours alone. I trekked up to 5450 meters which is one of the highest points of the mountain.

What do you feel can be done to improve the tourism potential of Kerala?

Creating awareness among locals to be more friendly and helpful to tourists is important. Also promoting ethnic tourism, which highlights our unique cultural activities and arranging well -planned seasonal tours would be another.

On an Onam day what would Lena do?

I would be at my grandmother’s place in Vadakancherry. I spend almost every Onam there and it makes a big difference to my grandmother. We are very traditional with the Onam Sadya and I would term it a classical Onam.

Paviyettante Madhurachooral with Sreenivasan is my upcoming film. I am a big fan of his movies and it’s like a very old dream coming true. Then I have Vaarikkuzhiyile Kolapaathakam and the upcoming Kunchacko Boban film Johny Johny Yes Appa.