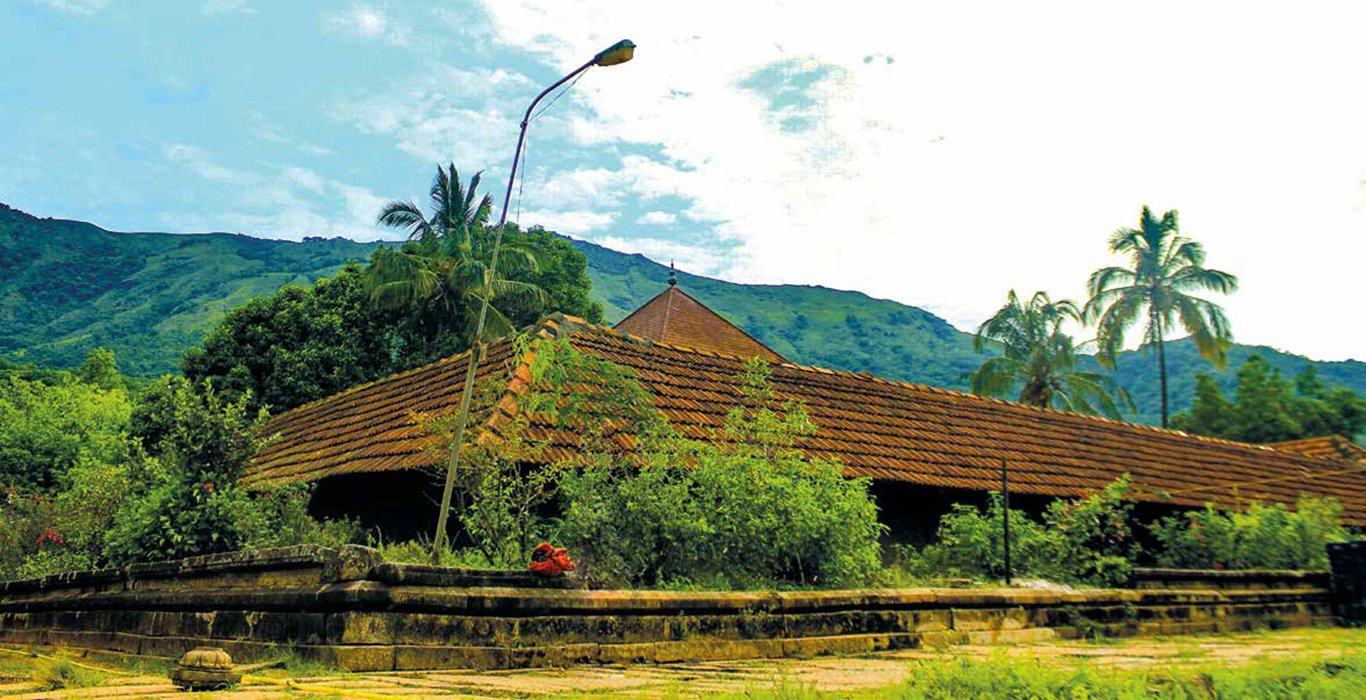 Living in Wayanad, home to the renowned Thirunelli temple, I have witnessed lakhs of devotees go to the Thekkan Kaasi for cleansing their papams/ sins and perform last rites for their loved ones. When you go during the busy season, you can see people thronging to the different parts of the temple to do various rituals. While I stood there, watching them, I could hardly figure out the reason for the mass attraction/power, even though evidently, I was being part of a phenomenon. The Thirunelli temple is unique as it has the presence of Lord Vishnu, Lord Shiva and Lord Brahma- the trinities. It has many names like the Sahyamala Kshetram, Kashi of the South and so on. On a quiet day, while walking across the deities and other prominent places of the 5000-yearold temple, I felt that there is definitely a calling there, a power that reckons you to reconcile with life and God at the same time. If you ask me what I took back home from there, it is difficult to quantify or qualify. If you are born a Hindu, then you have to do Pithrutharpanam at Thirunelly is what the holy books say. The last rites are done for the souls of 7 generations of people in your father’s and mother’s side and everybody associated with you. Unlike other places, there is a prayer and information session given to the people performing last rites before they set out to do so. They are asked to remember all souls departed from their family circle and pray for forgiveness. Undividedly, they pray for well-being and a new start hoping their sins are washed away.

Various theories in place
According to mythology, Lord Brahma, during one of his travels, found the Brahmagiri hills to be beautiful and picturesque. As he was enjoying the natural beauty, he spotted a small deity of Lord Vishnu on an Amla tree known as ‘Nelli’. Hence the name Thirunelli, ‘Thiru’ signifying divine or holy highness. With the help of Devas, Lord Brahma pronounced the place as Lord Vishnu’s temple, the Sahyadri Kshetra. Lord Vishnu promised that the water surrounding the area would wash away the sins of mankind, if properly prayed to.

Not many know that after the regular 5 poojas in this temple, there is a secret 6th pooja performed by Lord Brahma himself during the Brahmamurtham.

THE PAPANASINI
Thirunelli temple, known for performing the last rites, has a huge mountain stream that flows from the Brahmagiri forest onto the temple premises. The sacred water from this Papanasini is believed to wash off sins and is also a place for immersion of cremated ashes while performing last rites. According to mythology, Lord Vishnu’s carrier, Garuda dropped a bead of nectar into the Papanasini stream which gave the purifying power to the stream. Garuda later rested in the Pakshipathalam, adjacent to the temple, known for varieties of birds. The river Ganga and the river Saraswathi joins in the Papanasini. It is interesting to note that Rajiv Gandhi’s ashes were immersed in Papanasini in 1991. Lord Parasurama had also performed Bali Tharpana in The Papanasini.

You need to pray for all sins that has been done knowingly and unknowingly. When you are a baby in your mother’s womb, you might have kicked her naturally. From that point to this very point where you are here in Thirunelli, all the sins are requested to be forgiven. I have seen magical transformations happen here since time immemorial.

Walking through the temple surroundings, you see pearls of wisdom in the form of scholars. Sukumaran Unni Moose, an enthusiast and a scholar at the temple says, “If you come to Thirunelli and recite Samasthaparadha Kshamiswa, your sins will be forgiven and you will get a rebirth. You need to pray for all sins that has been done knowingly and unknowingly. When you are a baby in your mother’s womb, you might have kicked her naturally. From that point to this very point, where you are here in Thirunelli, all the sins are requested to be forgiven. I have seen magical transformations happen here since time immemorial.” From up above, the entire temple resembles the sign of Om. Hence you feel a positive vibe here, more like enhanced spirituality and positivity. While traveling back through the jungle, the gentle touch of cool breeze on my face and the feel of the cold water from the Papanasini made me happy. At this point, the story of the Phoenix bird crossed my mind. The bird rose from its ashes, to a new life. Somehow the feeling seemed familiar. 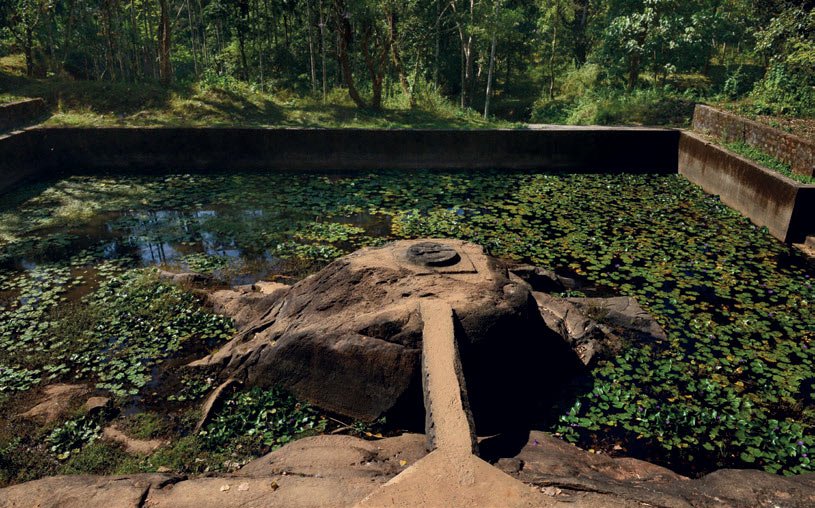 This is the holy temple pond where water never ceases to exist. It is the culmination of 5 rivers and has Lord Vishnu’s footprint on a rock at the centre. 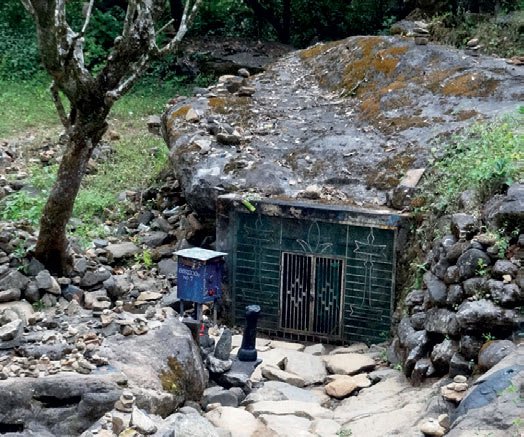 The deity is told to be established by Agasthya Muni. Some say it is the route to the famous Kottiyoor temple while others believe it is the way river Punarjani flows from Thiruvillamala temple to Thirunelli temple. An interesting aspect is that the Puja can be done at The Gunnikan only by sitting down as the roof holds very low. There is an Amla made of stone there that is supposed to come out during the era of Kali! 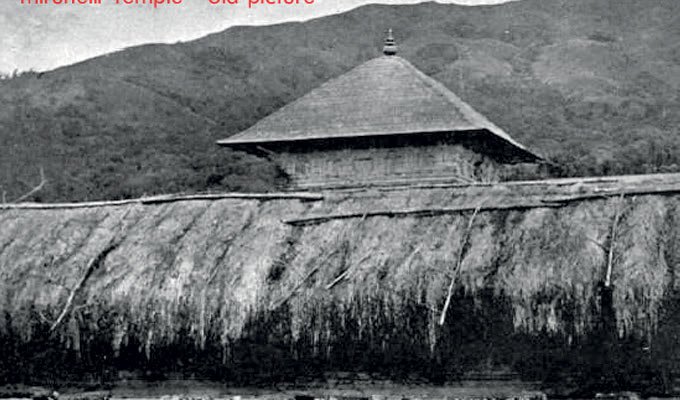 Not many know that after the regular 5 poojas in this temple, there is a secret 6th pooja performed by Lord Brahma himself during the Brahmamurtham. The priest keeps the things required ready before he leaves for the night and finds that that the puja has been performed the next day he opens the temple. Only the Namboodiri or the priest knows what is left of the Pooja and has not disclosed this to anyone ever. This is a well-kept secret of the temple and has been followed strictly over the years. 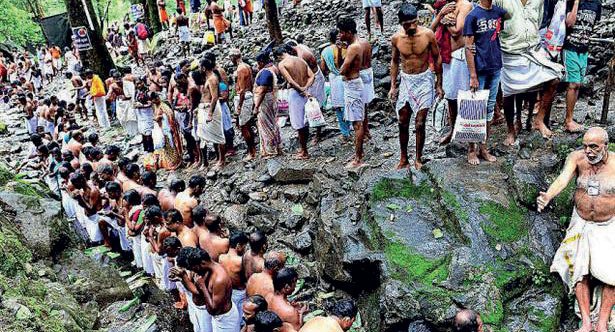 The last rites or Pithrukarma are performed near this rock named Pinnappara, especially during the new moon days of the Malayalam months of Karkidakam, Thulam and Kumbhom. Apparently, it is the bone of a demon who was killed by Lord Vishnu. His body is divided into 3 parts where last rites are offered- the foot is the Thirunelli temple, the body is Godavari and head is at Gaya. Offering prayers at any of these sites is considered to give happiness and expiation of spirits. It is believed that Lord Sri Rama and Lakshmana performed pithrukarma for Lord Dasaratha here.