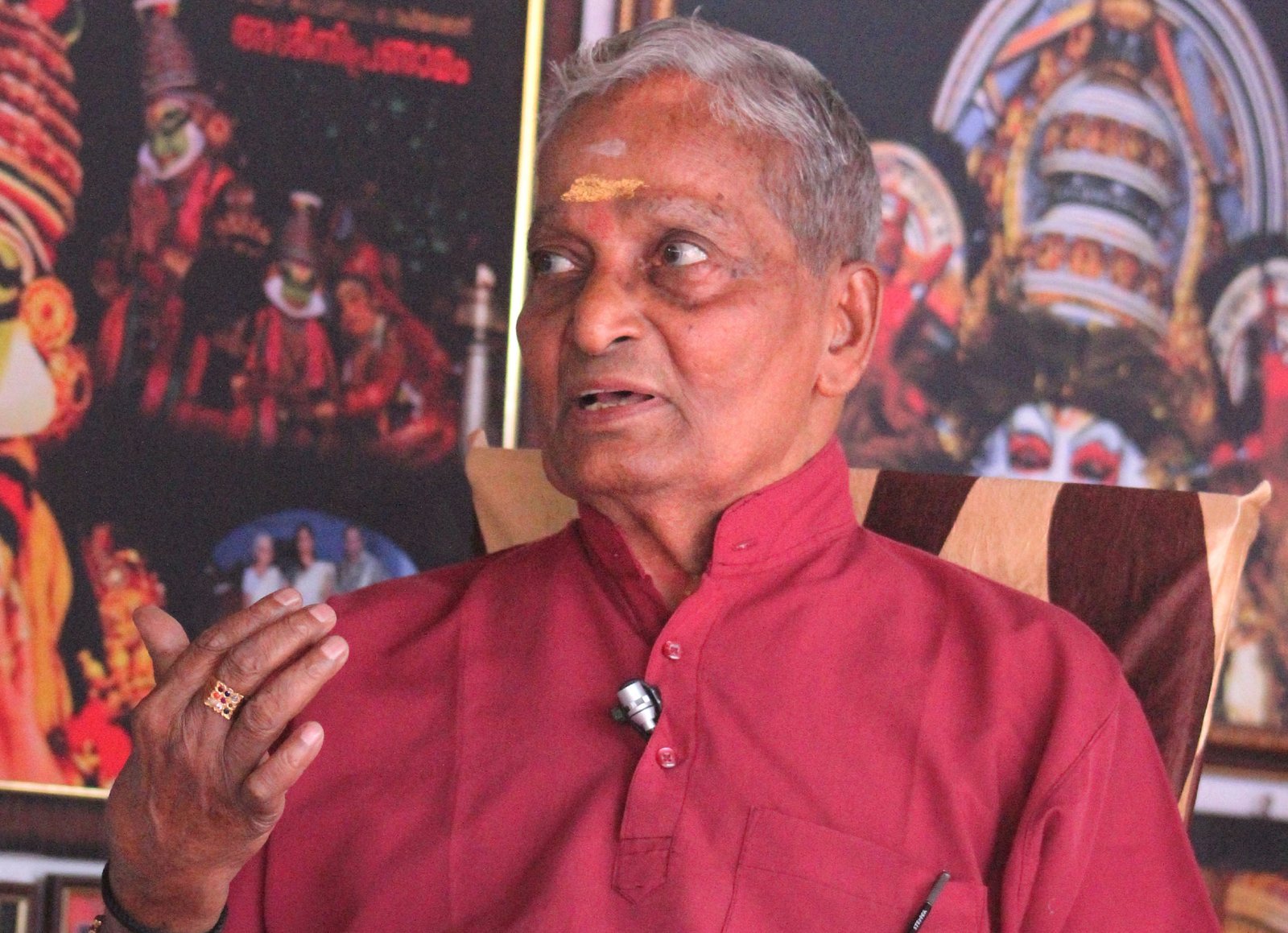 The Kerala Explorer met up with Gopi Asan for a tête-à-tête at his residence in Mundur village in Thrissur. Here are excerpts from an interview conducted by Revathy Krishnakumar.

Vadakke Manalath Govindan Nair more popularly known as Padma Shri Kalamandalam Gopi Asan is regarded one of the greatest Kathakali artistes Kerala has produced. An octogenarian now, he celebrated his eightieth birthday on 21st May this year.

The internationally famous Kathakali, which combines features of ballet, opera, mime, masque and pantomime, is the best-known art form of Kerala. This form of dance-drama traditionally presented in temple precincts from dusk to dawn during festivals, demands ten to twelve years of training and regular practice.

Known for the romantic and dramatic portrayal of the virtuous pachcha roles in Kathakali, Gopi Asan blends the solid body grammar of the highly stylised Kalluvazhi tradition in which he was groomed with the more flexible, part-realistic, emotion-laden southern style techniques he acquired later in his career.

Notable among his pachcha vesham are his roles enacting mythological righteous charcters like Nalan, Karnan and Rukmangadan. However, he is equally adept in playing the choreographically denser roles like Bheeman (in the stories Kalyanasougandhikam or Bakavadham), Arjuna (Subhadraharanam) and Dharmaputran (that’s Yudhishthira in Kirmeeravadham).

Gopi Asan also excels in the yellow-faced Pazhuppu (ripe) roles such as Balabhadra, and has of late also branched out to portray variety roles like the anti-heroic Kaththi (like Ravana, Keechaka and Duryodhana) blackbearded Kaatalan (Kiratham), red-bearded Bali (Balivijayam) and even the semi-realistic looking Brahmanan in Santanagopalam.

You have been associated with this illustrious institution Kalamandalam for a long time. How was it when you started and how it is it now when you are 80 years old? What are the notable changes that you have seen over the years? It’s been decades that I am associated with Kalamandalam. Be it as a student or as a teacher, it has always been a delight. While I was the principal of the institution, the syllabus was less compared to today. Now, since the education curriculum is included along with the art curriculum, I feel much more time and importance is given to theory and academics than the art itself. As far as I am concerned, academics should be given significance, but the stress should be given more Hindi, English and Sanskrit, the three languages which are necessary, apart from Art.

One notable change that happened after my tenure in the institution is that the special classes or evening classes for practicing the art has been taken out from the curriculum, which in my view has affected the quality of the art, to some extent.

I feel is things are to be discussed well before we decide on implementing or modifying the curriculum. I will be careful with my words, but I am positive in my belief that the quality of the art imparted to students must improve.

At what age were you initiated into this art? I started my education as a Thullal artiste in the age of eight and I continued it for two years. Later on at the age of 11 I joined Nagarasheeri Mana as a student but didn’t study there for long. Then in 1951 when I was 13-year-old I joined Kalamandalam, and I was there till I completed my education.

Who are the Gurus from whom you learnt your art? When I was in Nagarasheeri Mana, I learned the art form from Thekkinkkadu Ravuni Nair but as I just said, I couldn’t continue my studies there I joined Kalamandalam. At Kalamandalam, at first I was taught the art form by Kalamandalam Ramankutty Nair and Kalamandalam Krishnankutty Warrier. But unfortunately, Maha Kavi Valathol shifted Sri Krishnankutty Warrier to the dance department and Kalamandalam Padmanabhan Nair took over his place. Of course, there were many temporary guest lecturers who used to visit us, but these two legends were constant in shaping me as an artiste.

“We artistes who perform Kathakali, don’t really care about the differences of tradition, however, we make sure that we don’t become very evident in showing the differences to the audiences.”

You have performed at many international venues. Which of these venues are your favourite and why? All the stages or venues I have performed are dearest to me. There are many venues within Kerala and also abroad that is favourite to me because I love what I am doing. It is very difficult to tell, which in particular I like the most.

Do you think enough is being done to promote this art form of Kathakali? Even though, Kathakali is an art form which is accepted and famous globally, many parents are reluctant to teach their kids or to choose this as their career. I guess, it’s because of the fear of not finding a job once they are out of the Kalamandalam or any Art School per se. People should be more willing to learn such art forms and believe that there is a career in this field too. I don’t know if I have done enough for the same, but I believe I tried my level best to attract more number of students to Kathakali. As I mentioned before, I have retired from Kalamandalam long ago, but I am still taking classes, five days a week for M.A. students apart from take training and practice classes for Degree students too. I try to give and bring out the best from my students. One thing I always make sure is that I give them good advices and lessons.

“I don’t know if I have done enough for the same, but I believe I tried my level best to attract more number of students to Kathakali.”

What are your suggestions to make Kathakali still more popular globally? Any art form needs dedication and love towards it and that’s the same with Kathakali too. Like I said earlier, more people should turn up to the school for education of these art forms. Another thing I would like to mention is the hardship that goes into learning Kathakali is high than any other art form and even after learning it, it needs the artist’ to put their heart and soul into it, for the performance to excel.

You are 80 now and still performing. How do you manage to get the stamina and strength required to perform at this age? If you ask me, I would say that the respect I have towards the art I perform is the main reason behind it. The true dedication and hard work to present well in front of people, keeps me going. Until I am healthy, oh I am not saying that I am healthy enough, but till the time I can perform Kathakali, I take it as a challenge and go in front of the audience with great enthusiasm and energy. Since few months, it’s a strain to reach to places for performance but I never say no. I know that the organisers find it burdensome but they don’t make it evident and I also make sure that I don’t let them down.

You have performed various characters in many stages. Which are the most easiest and one of your favorites? It would be easy if you don’t perform at all. There is nothing so easy about Kathakali. If I am not wrong, this is not the last interview I am going to attend and this is not the first time I am being asked this question. It is not me who decides which is the favorite character but the audience and the organizers. I have no say in what I am performing on stage. I am just an artiste and I perform what I am asked for.

“The true dedication and hard work to present well in front of people, keeps me going. Until I am healthy enough, I take it as a challenge and go in front of the audience with great enthusiasm and energy.”

Have any of your children followed your footsteps? No, I have not taught my children Kathakali. It is not because they were not interested in it but because I didn’t want them to lose their education or schooling. They were very keen about Kathakali but I choose not to teach them.

Among the current crop of younger performers, who are the most promising ones according to you? I don’t think I will be able cater an answer to this question of yours. We are no one to predict the future and I fail to do that too. I don’t know who will perform well in the coming days as learning is a process and those who don’t perform well today might perform amazingly tomorrow. It purely depends on the students’ calibre and dedication towards the art. I love those students who are passionate about the art form and showcase a great interest. Most of the kids who I teach are well motivated about learning Kathakali , so I cannot name a student in particular.

Colours and costumes that represent characters

Vesham means make up. In Kathakali, the vesham (costume), which is of five types, represents five kinds of characters. The Kaththi vesham (Kaththi means knife) is to represent villainous male characters. The other four veshams are Pachcha (green) for noble characters, Thadi (beard) and Kari (black) for lowly characters, and Minukku (which means prettying up) for women, sages, Brahmins and so on.