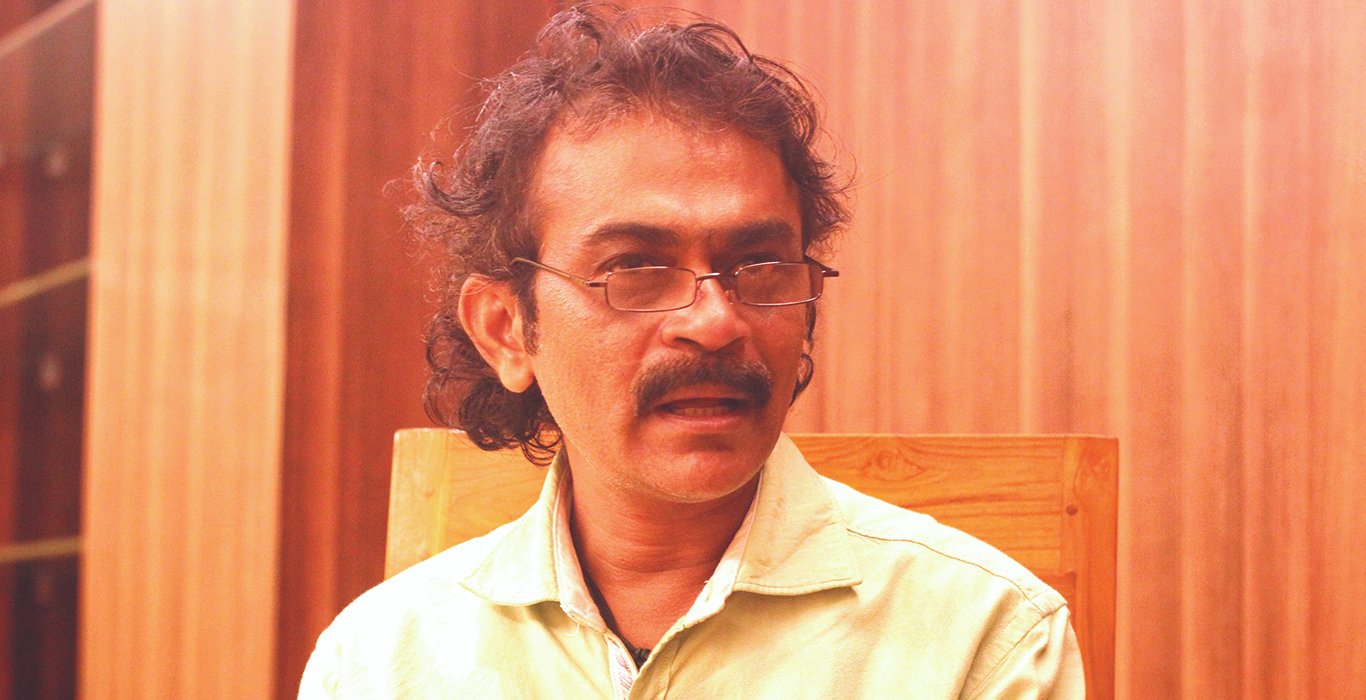 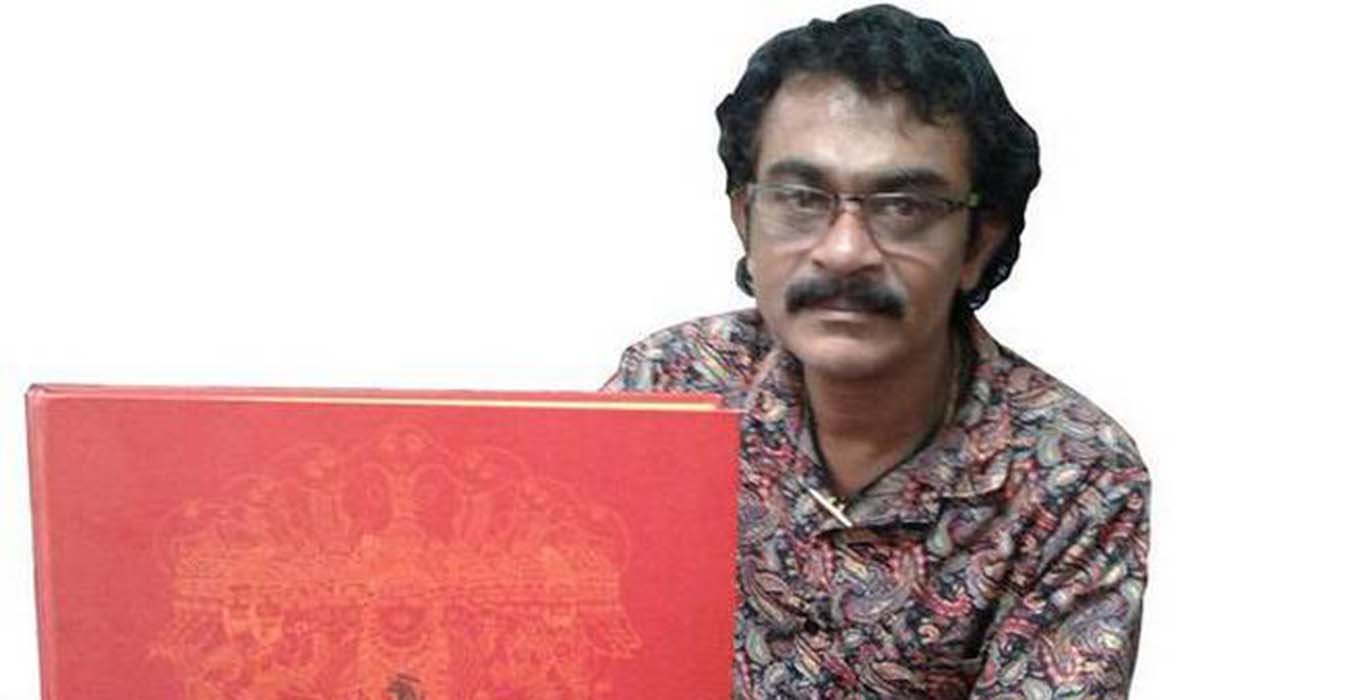 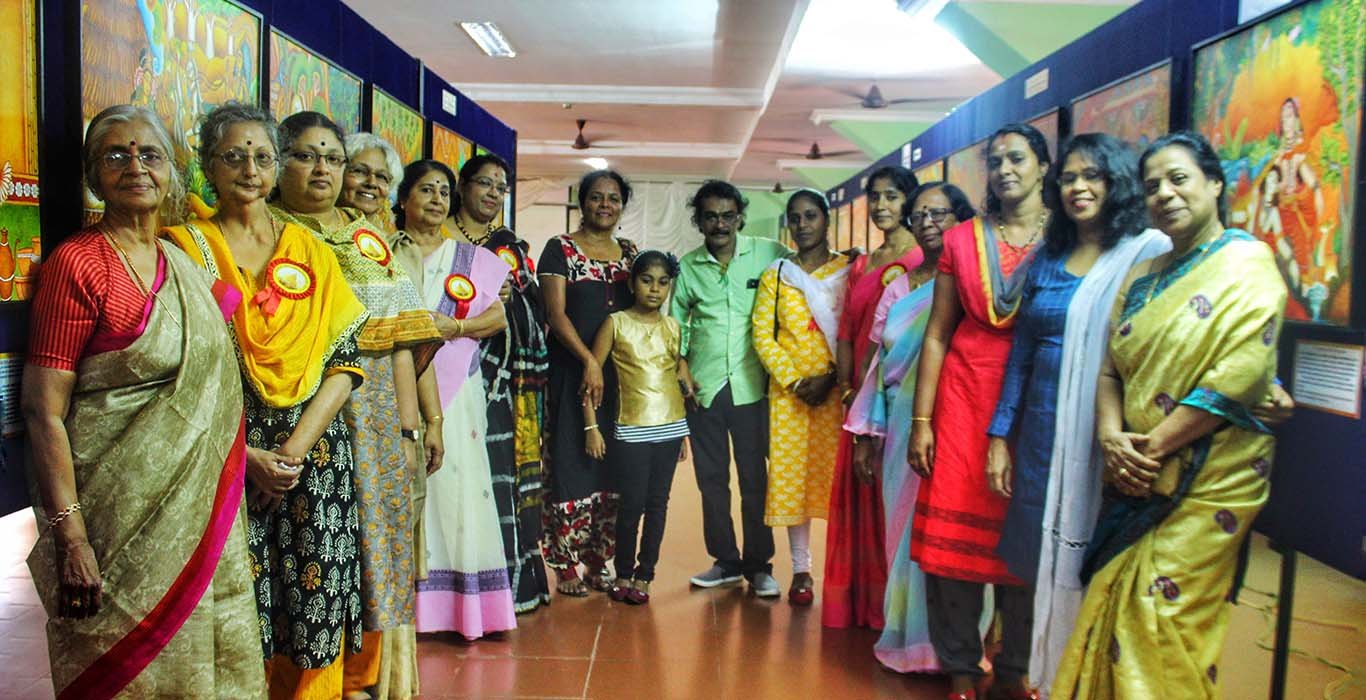 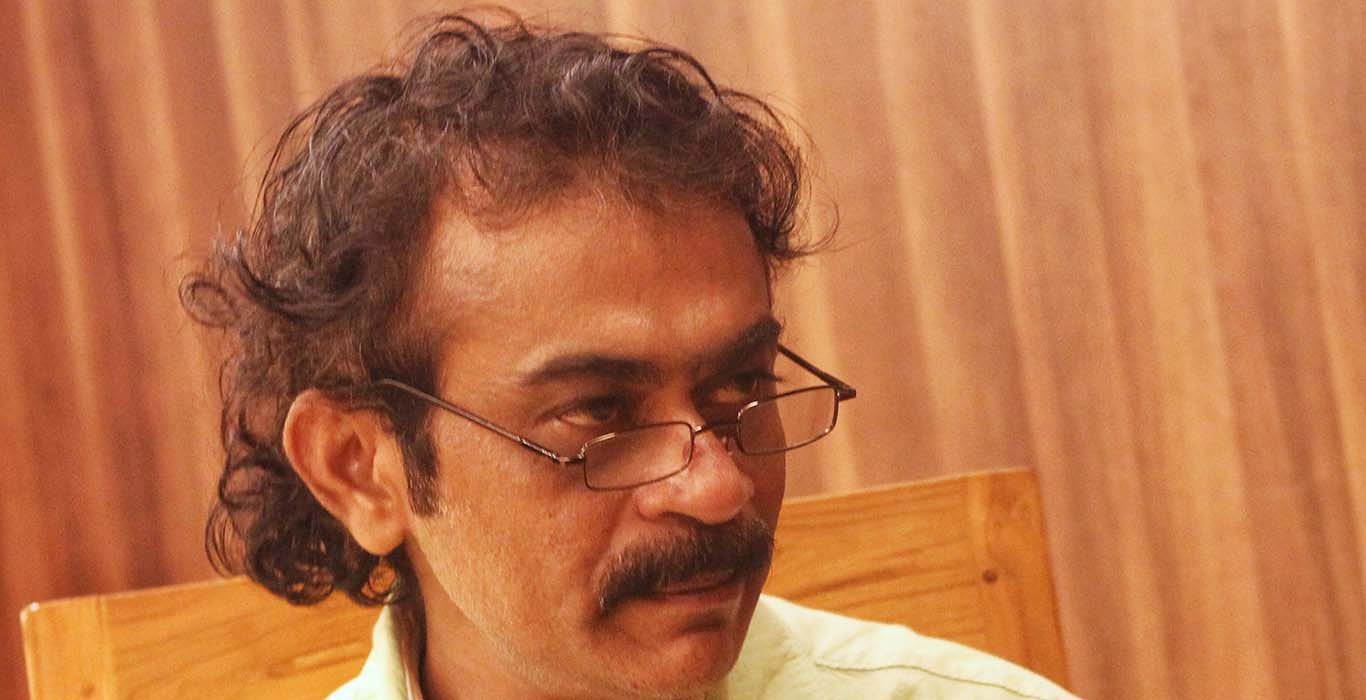 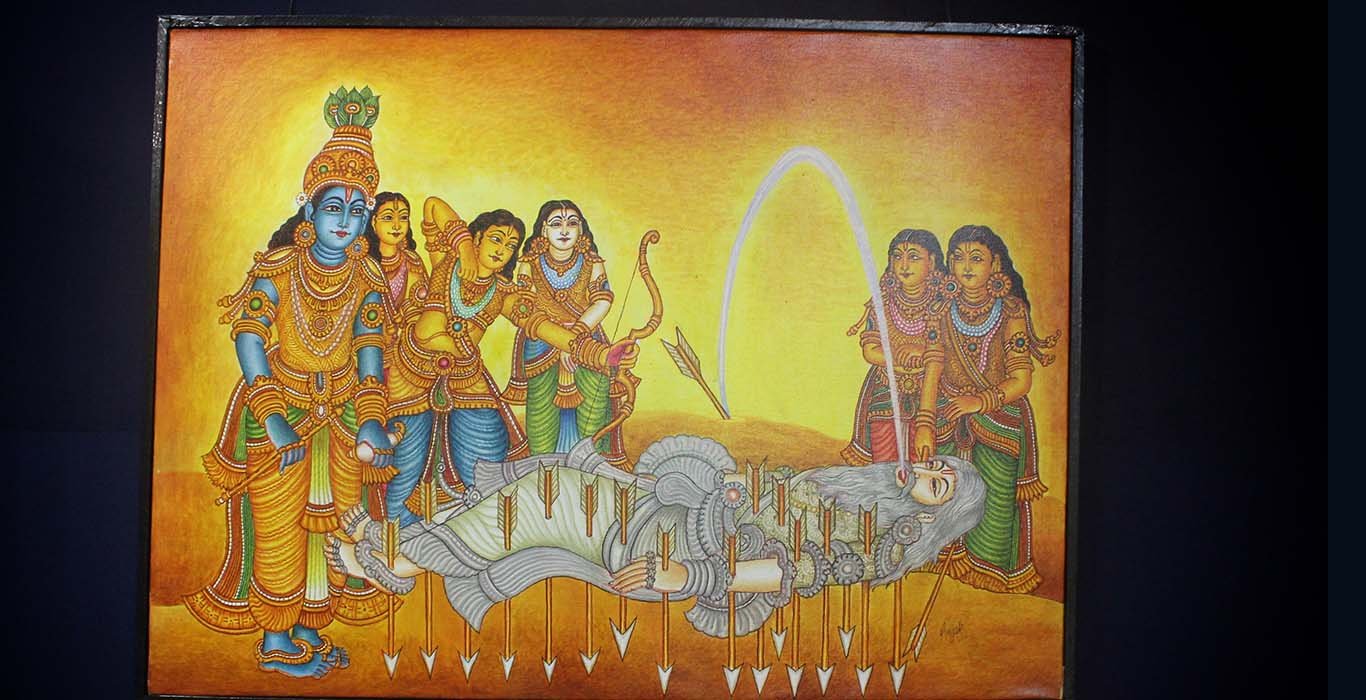 The Famed Mural Artist of Kerala

A highly talented mural artist known for his authentic and beautiful mural works all over India, Prince Thonnakkal was born in 1972 at Thonnakkal, in Thiruvananthapuram district of Kerala. Having a passion for sketching and painting since childhood, he completed his fi ve year National Diploma in Traditional Mural Painting from the Institute of Mural Painting, Guruvayoor under the tutelage of the legendary mural artist late Mammiyur Krishnankutty Nair. Thereafter, he spent another two years training in visual arts from Chitrakala Academy, Attingal near Thiruvananthapuram. His paintings mesmerise the viewers. In order to carry his traditional art to the modern world, he combines the traditional art-mural paintings with modern styles. He has been presenting his works on exhibition at many national and State-level events since 1992.Among them, Mural Ramayan, Mural Vinayaka and Manikantan - a mural journey, have received huge popularity.

His works have found a place prominent places like Temples, Films, Companies, Hotels, Houses, Hospitals,Airports and many other places. The most famous works in the above areas include Padmanabhaswami temple mural, Banaras and Rishivamsham Malayalam movie.

The artist conducts mural tuitions across India. He has nearly 100 students under his tutelage. He also worked as Instructor in Mural Arts at the Sree Sankaracharya University of Sanskrit, Kalady from 1998 to 2001. The Kerala Travel Explorer met him for an interview on the sidelines of his latest exhibition conducted at Thiruvanthapuram

Can you tell us something about your inspiration that led you into the world of Mural painting? I used to draw as a child. The main reason to come into the world of mural painting was that while I was doing my KGT - Diploma in drawing, I saw a small newspaper advertisement for Chuvar Chirtra Kala inviting applications from new students. There were only 10 seats for the course and my name created some confusion initially. But, the good thing was, after the initial hiccups, I eventually managed to get admission for the course. This was in the year 1989 and it was for a period of 5 years and conducted by the Guruvayoor Dewasom Board. After completion of the course, I became active in this field and now it has been twenty five years since I have been actively involved with Mural Paintings. I have done mural paintings in lot of temples and I am also engaged in a lot of private work. In addition, I am also trying to set up an institution to share and impart the knowledge I have acquired over the years and the project Mahabharata is the result of this.

How is Kerala mural painting different from the others? Every state has its own form of mural painting, and not just Kerala. Tamil Nadu, Telengana, Andhra Pradesh and Karnataka also have their own kind of mural paintings. The difference in Kerala mural painting is its ‘Rekhavinyasa’ – which is the arrangement and prominence of the black outlines. The abundance of such lines are not present in mural paintings of other states. Rekhavinyasa creates a form of illusion in the mind of the viewers – it is almost as if, there is no beginning and no end; it is a perpetual continuation of lines. In all mural work the importance is on the painting – but in Kerala along with painting, these black lines are also important. No work is regarded complete without these black outlines. This is also called and when the outline is complete, it also becomes difficult for the viewer to discern the beginning and end, and this is also what renders the painting its aura of illusion, and that which sets apart Kerala mural painting from the other states.

Which would be your favourite work? I started drawing in Krishna Kshetrams and the maximum I have drawn is also Krishna. Most of my students are women and they too like to have Krishna drawn. As such, I would say works of Lord Krishna are my favourite. You won the State Award for art direction in the movie ‘Rishivamsham’. Tell us something about it. Art Director Nemom Pushparaj is the one who brought Mural painting into films from the film ‘Paithrukam’ onwards. Before that films shot in temples showed mural paintings but never got the visibility it should have. The beauty of murals is that when used as a backdrop, everything else fades to insignificance only bringing focus on the painting.

Rishvamsham is Rajeev Anchal’s movie in which Chanchal and Nishanth were cast in the leading roles. Lots of scenes in the movie were depicted as plays, and that is when the idea struck Rajeev Anchal, that murals could be put to good use in the movie. The movie was shot in the twenty five acre expanse of Shantigiri Ashram with the huge sets and cut outs. And, for the first time, the cut outs of the play were entirely made up of mural paintings, and apart from me, Girish Malayamma, Unni Amakaavu, Ramesh Kovumbal were the leading mural artists commissioned for this project.

The trees were drawn onto fine plywood and it was depicted as the characters moving through forests of plywood painted trees with the leaves glued to them. I stayed for three months at the Shanthigiri Ashram for the project. My friend Murguan Shadow was the Art Director for the movie and our names were acknowledged as mural painters. The award went to the Art Director but the work is acknowledged as a joint venture. It was a project that gave me a lot of satisfaction. I am still in contact with Rajeev Anchal and share an excellent rapport with him too. Jadayu Parra is also another project by Rajeev Anchal and I was contacted to do the mural paintings which is also a take out of Ramayana.

“ I would say works of Lord Krishna are my favourite.”

Every artist has his own signature style. How do you give your work your own style? It’s very difficult to differentiate between artists in their paintings these days due to the variety of colour schemes and the number of artists. But, I would say the depiction of the face in my paintings is my specialty, and of course, the finish, the shading and charisma of it, is the key differentiator. And, I consider it as a blessing from the divine.

“The difference in Kerala mural painting is its ‘Rekhavinyasa’ – which is the arrangement and prominence of the black outlines. The abundance of such lines are not present in mural paintings of other states.”

Tell us something about the exhibition you participated in January this year? I would consider this a success in par with Baahubali. Thiruvanthapuram has not witnessed a painting exhibition of such magnitude before. My earlier work of Ramayana is the inspiration for this work.

Thirty five homemakers from different walks of life and fields have come together to produce this artwork based on Mahabharata which took four years from start to finish. It is the hard-work and dedication of these people that have made it a success. This idea of Mahabharata came because it is unique. The concern was how to condense the vast number of stories into paintings. It is nearly impossible to narrate all the stories of the Mahabharata, so we have followed only the main stories. So the series of paintings starts with the first one depicting Veda Vyasa narrating the story of Mahabharata and Ganapati penning it to the last painting being one of Yudhishthira reaching his heavenly abode. In total there are 112 paintings. The work was divided in such a way, that each person has to do at least three paintings. Along with this, we have also published a book ‘Mural Mahabharatha’. We are planning to hold the exhibition only in three cities - Ernakulam, Thiruvanthapuram and Chennai. We do not have logistical support in other states. All the thirty-five students selected their subjects by drawing lots. First the story board was decided then small drawings were done. There needs to be a continuum and similarity so as to identify it as Prince’s work, so I did the drawings first, and the others filled in with the painting. The reason it took so long is that people were residing far off, in different states and were doing this in the midst of their other commitments. But the teamwork and effort that went into it is truly commendable. This is the first time that so many people have come to appreciate paintings in an exhibition.

What would be your dream project? This was my dream project. Mahabharata was one of my dreams and I can’t imagine anything beyond it.

Why only women? Do you not have any male students? A lot of people have asked me this question. It’s not that I don’t have any male students. There are some like Ajith, Bineesh, Vinod, Kannan. They are all senior to me in age, but my students. They are all now involved with their own work. Many asked me to be a part of this work as well but this project needed something unique about it like women’s project or so qualifying it for a record or recognition. And, even otherwise very few men are interested in art. So, I felt women are more serious about such projects and are willing to devote more time after their other commitments to complete the paintings from home. However, my next project which will be a bigger one will include both men and women.

Which work of yours do you consider as your masterpiece? I would say Vishwaroopam is something I consider closer to a masterpiece. My masterpiece would be a bigger one in terms of size and dimensions – not to fix anywhere, but one that will be given away to a theatre or individual. There is no question of it being anything other than Lord Krishna.

What is a day like in an artist’s life? Every artist’s life will be one that is filled with worries and tensions. My life is no different as well. But, usually a day in my life begins with a review of the paintings in my own gallery, attached to my house in Chembamangalam in Thiruvanthapuram, where there is the workshop that includes framing display as well. I do a review of the drawings or any corrections to be made. Then I set out for my classes and the rest of the day is dedicated to tuitions. My wife is also an artist - a fine arts graduate who also takes care of the paintings. Students from around the locality come home for tuitions on the weekends.

“My work Vishwaroopam is something I consider closer to a masterpiece.”

What are the challenges you have faced? Challenges have been many. There have been times I have struggled even to buy colours and have been turned away when attempting to sell my work. It is an unexplainable feeling to have now reached a point where the same people are now requesting classes from me and I am finding it difficult to find time. To be recognized as a much sought after art teacher is definitely an achievement for me.

“Every artist’s life is filled with worries and tensions. My life is no different .”

Tell us about your family? Sangeetha my wife is also an artist and we have a daughter named Kajol who is studying in the sixth grade. My wife also helps me with my work. She also finds these types of big projects exciting.