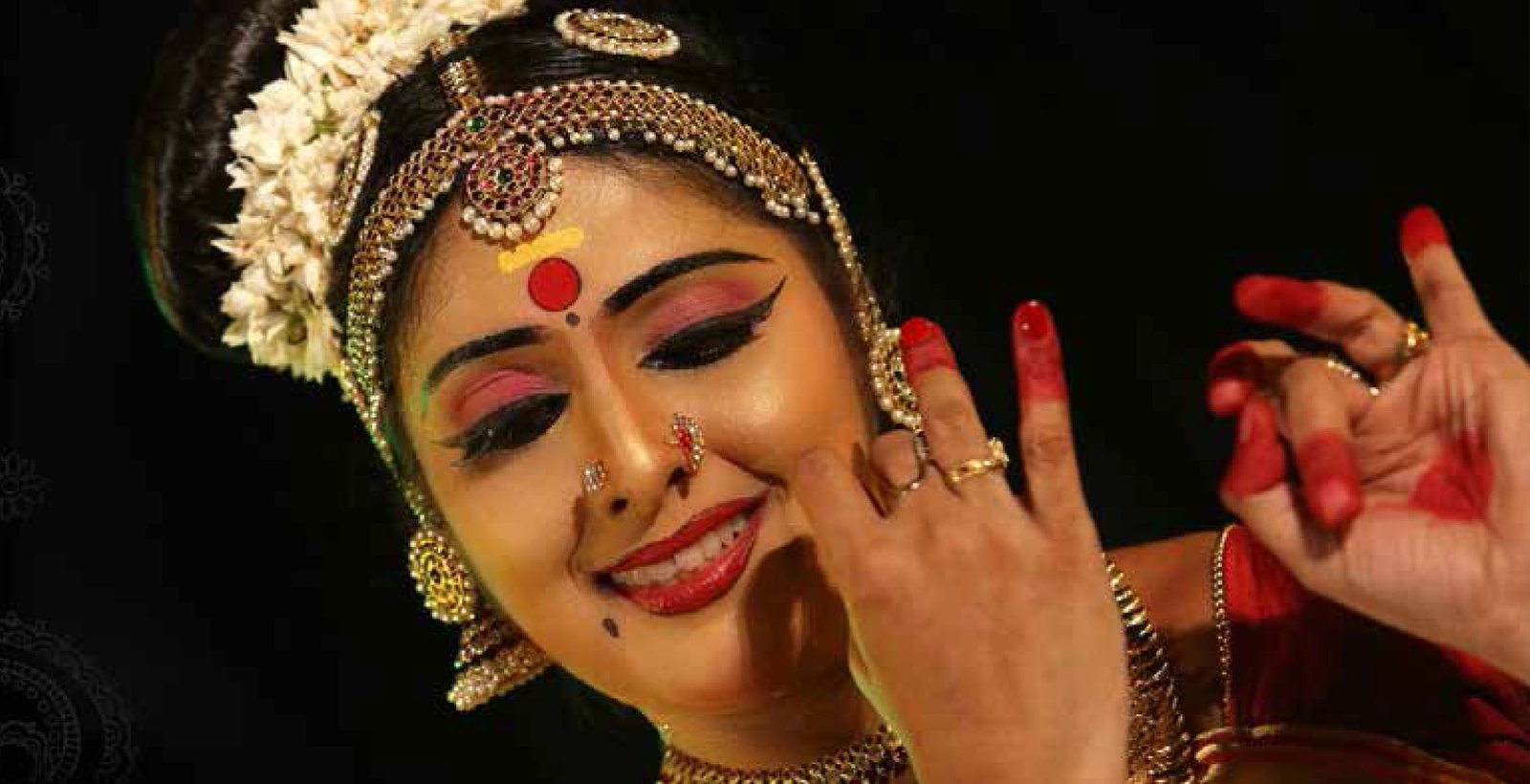 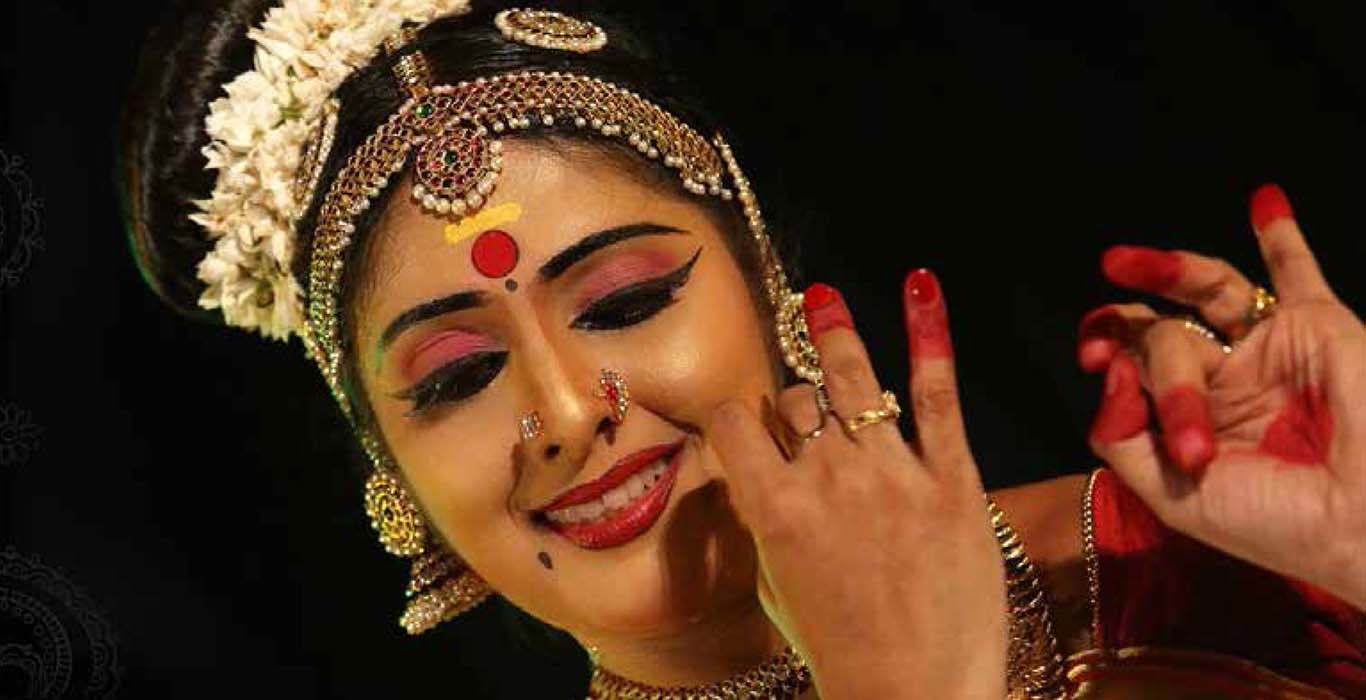 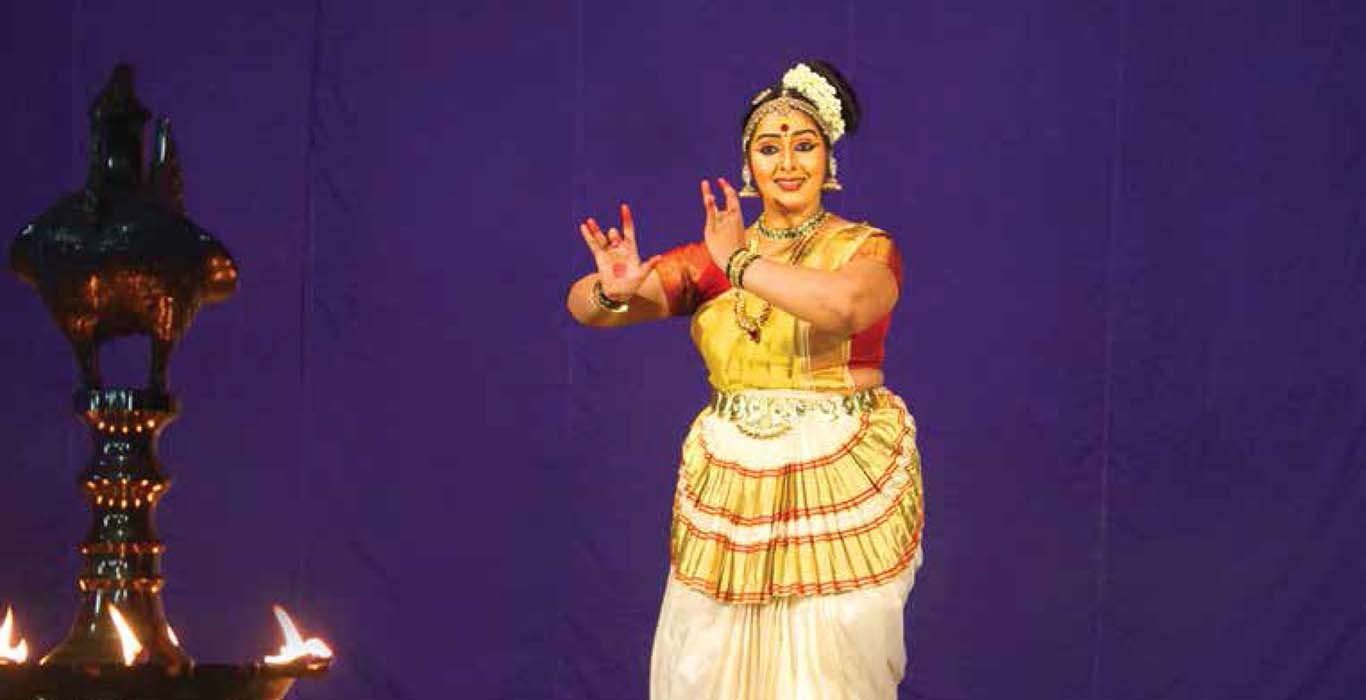 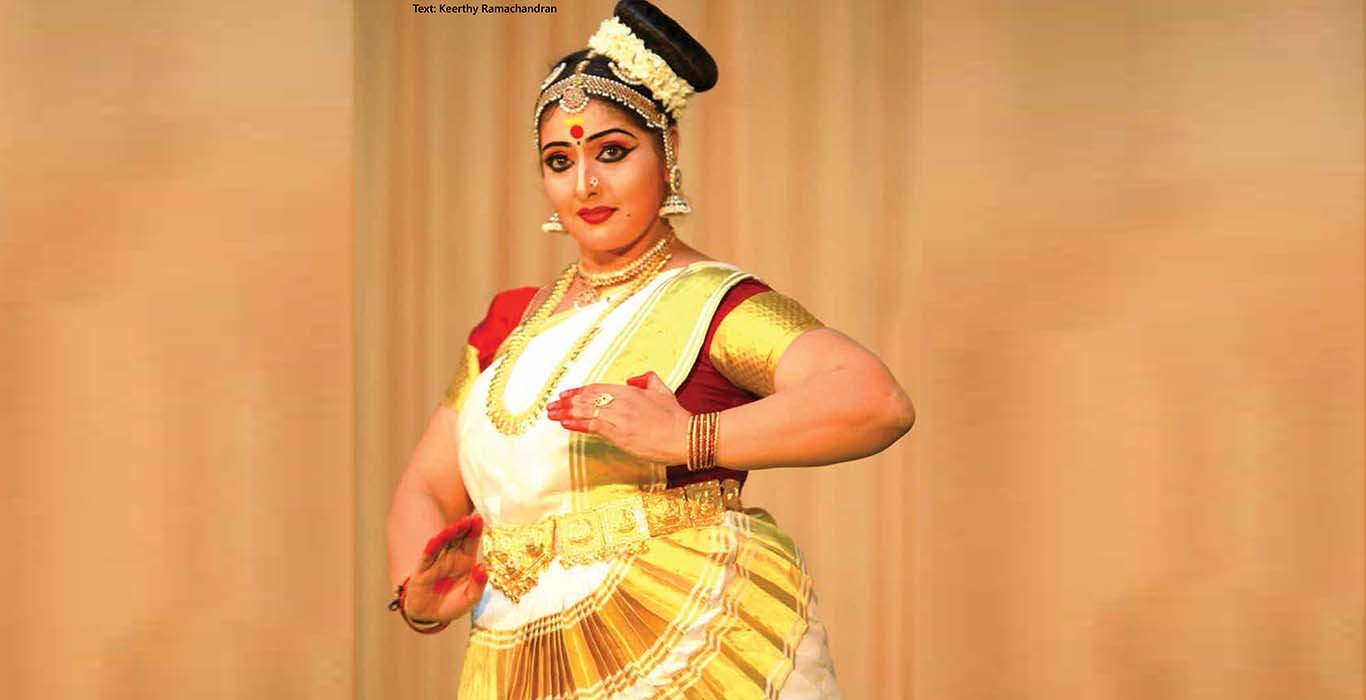 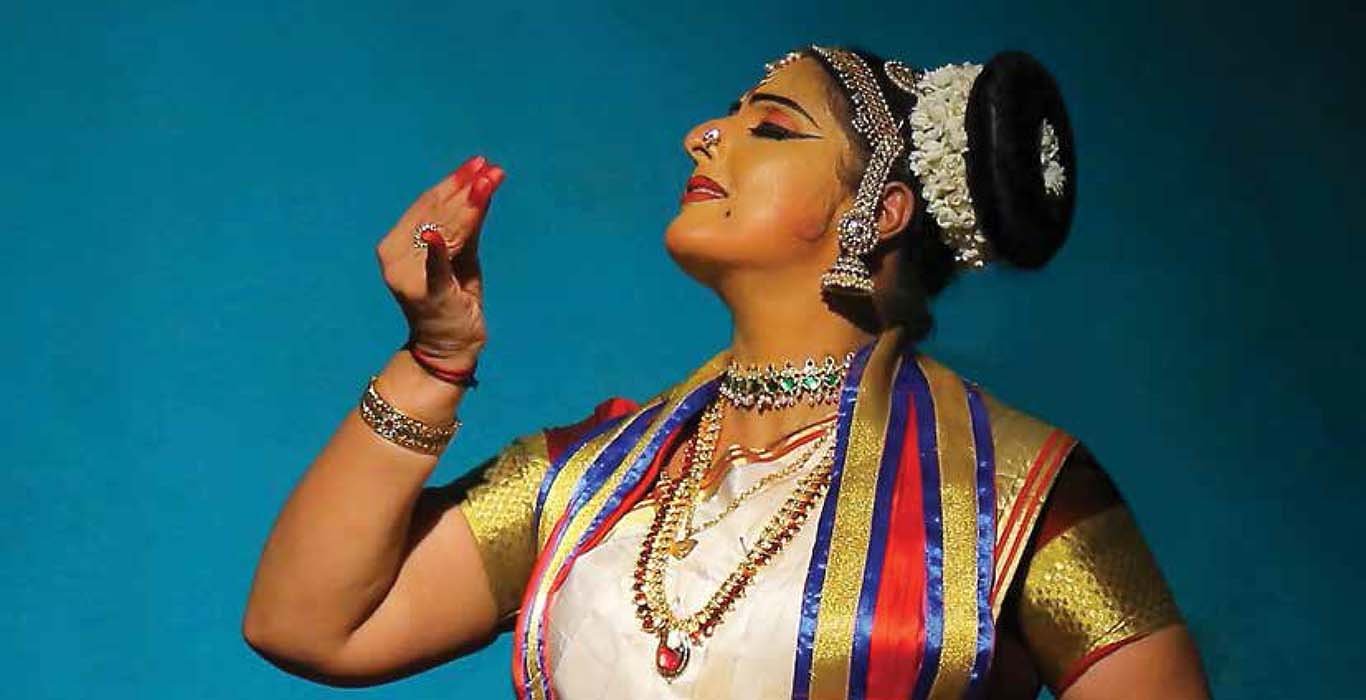 Reinventing the Charm of Lasya

It was a really special day at Changampuzha Samskarika Kendram, Kochi. The cultural centre established in memory of Kerala’s greatest romantic poet, the late Changampuzha Krishnan Pillai, made venue to a spectacular form of art which celebrated the brilliance of love. Rewriting the language of one of the oldest dance forms of God’s own country, Mohiniyattam, Soumya Sathish brought alive the enchantress’ dance on stage to narrate the infinite love of Dushyanthan for Shakunthala. While traditionally Mohiniyattam is performed as the Mohini’s (a female avatar of Lord Vishnu) dance, Soumya enacted a male character’s profound love for his paramour through the nrityavishkara (realization through dance) of Shakunthalam, the widely acclaimed literary work of A.R.Rajaraja Varma. While not many from the conservative society of Kerala would appreciate the act of experimenting with an age old form of dance like Mohiniyattam, the beauty and brilliance of Soumya’s performance as Dushyanthan won her many appreciations and smiles of gratification, including from the author himself. It was truly the biggest honour for the dancer in Soumya and an encouragement to her never-say-die spirit while exploring the versatility of Mohiniyattam.

“While traditionally Mohiniyattam is performed as the ‘Mohini’s’ (a female avatar of Lord Vishnu) dance, I have enacted a male character’s profound love for his paramour through the nrityavishkara (realisation through dance) of Shakunthalam, the widely acclaimed literary work of A. R .Rajaraja Varma.”

Danseuse Soumya Sathish was never this bold by nature. The coy, soft-spoken and innocent looking beauty from Thavalappara, Shornur was a discovery of dancer Kalamandalam Sridevi Gopinath. “I never knew I will be a Mohiniyattam dancer one day. Looking at my expressions and natural acting skills while performing, it was my guru who told me I am born for this,” recollects Soumya who today runs one of the most renowned dance schools in Kerala, Bharatha Kalamandiram in Elamakkara, Kochi. Soumya believes the birthplace of an artist goes a long way in enriching his/her career. “Unfortunately, not many budding dancers of the day have the confidence to pursue a career in dancing. However, in prowess and calibre they are way ahead than we were in our time,” says Soumya with a slight disappointment in her tone. “Today’s children are very clear of what they want in life. But they do not get the right support and encouragement to pursue their passion. I vividly remember this student of mine who despite being an excellent performer, discontinued dancing in a bid to focus on her studying as soon as she reached class 10th,” she adds. Soumya feels it is every parent’s responsibility to enlighten their children about their innate strengths and help them in cherishing their true talents instead of pushing them to jump on the bandwagon. “Many pass out MBBS every year, but only very few end up as great doctors. Similarly, only few are born to be great dancers.” she quips.

“Many pass out MBBS every year, but only very few end up as great doctors. Similarly, only few are born to be great dancers.”

Years back when Soumya decided to move to Kochi to establish her career in dancing, all that she had was her love for Mohiniyattam. It was sheer hard work and determination which led her to institute a dance school that started off with just 3 students and today boasts strength of 300 plus students learning Mohiniyattam, Bharathanatyam and Kuchipudi. A ‘kalathilakam’ herself, Soumya discourages students who approach her to study individual competition items to win accolades in youth festivals. “Discipline is very important to learn classical dance. To imbibe the beauty of an art form, one should completely surrender to it. Honours will come seeking the real talent,” she says.

“Dancing has unfortunately become a platform to reap fame by many. While it is not wrong to leverage the fame garnered through dance to enter film industry or modeling, it should not be considered as a stepping stone alone,” Soumya remarked. Ace filmmaker late Lohitadas cast her as the lead face opposite Mammootty in the movie Bhoothakannadi. However, she gave up the offer since her baby was too young then. But her acting skills came alive on silver screen years later when she donned the role of Bharat Gopy’s wife in Nivedyam, another Lohitadas movie. When filmmakers approach her with characters of substance, Soumya decides to appear on screen. She has just completed two movies in Tamil film industry.

“Lasya bhavam is more predominantly seen in Malayali women and hence they effortlessly master the subtle nuances of the art.”

as a dance form is known to be conceived in accordance with a Kerala woman’s body and innate expressions. Saumya confirms this observation saying, “Lasya bhavam is more predominantly seen in Malayali women and hence they effortlessly master the subtle nuances of the art.”

A literature student herself, Soumya is today in a mission to revive some of the best works of literature for the benefit of the current generation, by re-creating these works to dance forms. Her dance interpretation of the poem, “Krishna Ne Enne Ariyilla” penned by the prolific writer Sugathakumari won her wide acclaim from cultural enthusiasts and the writer herself. Reinforcing the potential of dance as a powerful tool to spread social message, she narrates her experience bringing alive the great poet O.N.V.Kurup’s “Kesamithu Kanduvo”. “The poem illuminates the grief Panchali was going through when Lord Krishna was leaving to meet the Kauravas as an apostle. The injustice meted out on Panchali takes different forms in our society, even today. When in pain, we express our anguish in our own mother tongue. As a dancer from Kerala, what could be a more powerful way of expressing my sentiment than bringing alive this great work of literature through Mohiniyattam?,” she asks.

Being a trained dancer in Mohiniyattam and Bharatanatyam, she feels the former has more leeway to take up messages of societal relevance since it gives greater importance to acting than mudras. A writer herself, while re-creating works of literature on stage, she carefully chooses lines which best exemplifies the essence of a poem. The biggest challenge she faces here is deciding the suitable form of dance and the costume that could best amplify the message.

But the dancer in Soumya loves taking challenges. Dancing makes her one with the eternal spirit. “On stage, I can be Krishna, Shiva, Dushyanthan, Seetha and more. Mohiniyattam is that divine form of art which lets me be what I am, I don’t mask my emotions. My expressions speak aloud my thoughts,” she sums up.