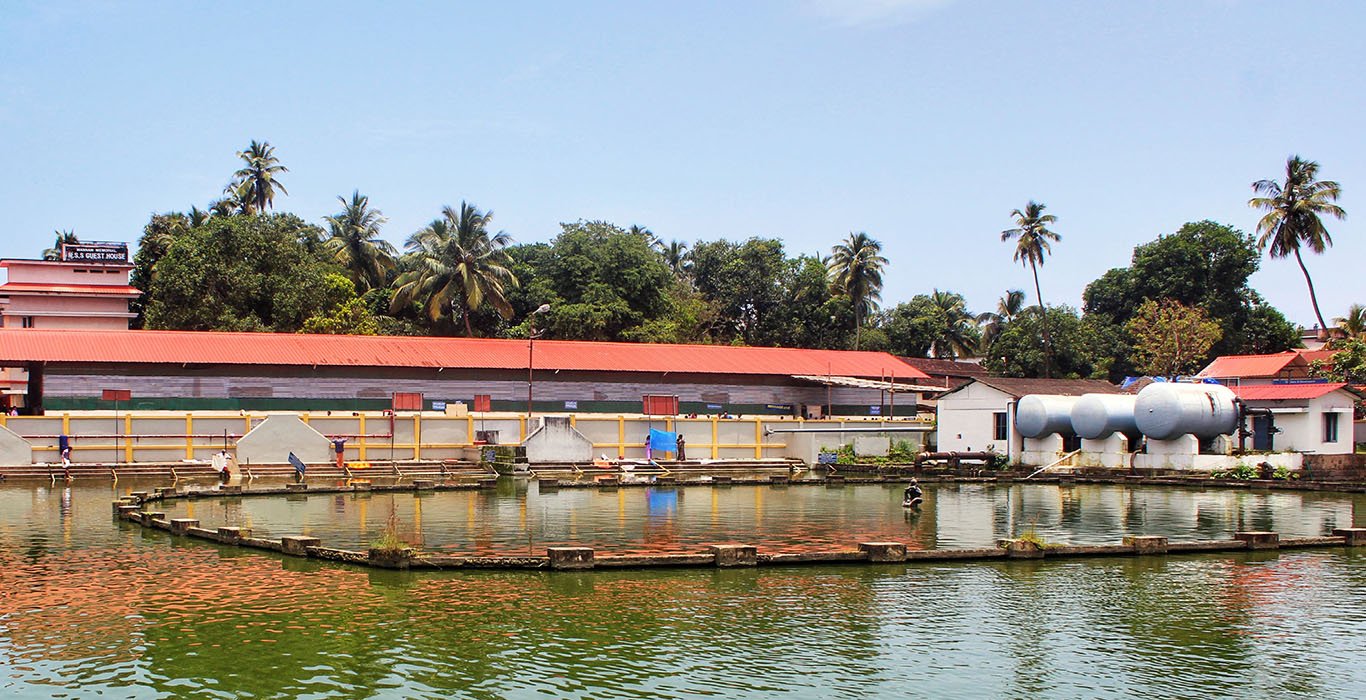 Guruvayur is one of the most sacred and important Hindu pilgrim centres of Kerala. Its main attraction is the Guruvayur Temple. According to popular belief, the temple is the creation of Guru, the preceptor of the Gods, and Vayu, God of the winds. The eastern nada is the main entrance to the shrine. Guruvayur is a pilgrim centre which has its own glory and greatness, mainly because of the divinity enshrined in the Sanctum - Sanctorum (central shrine) of the temple and the unique charm of the idol installed in it.

The presiding deity in the Garbhagraha (central shrine) is Mahavishnu, worshipped according to the pooja routines laid down by Adi Sankaracharya and later written into the Tantrasamuchaya by Chennas Narayanan Namboodiri (born in 1427). The Chennas Namboodiris are the hereditary Tantri of Guruvayur temple.

In the Chuttambalam (outer enclosure) is the tall 33.5 m high gold-plated Dwajasthambam (flag-post). There is also a 7-metre high Deepasthambam (pillar of lamps), whose thirteen circular receptacles provide a truly gorgeous spectacle when lit. The square Sreekovil is the sacred sanctum sanctorum of the temple, housing the main deity. Within the temple, there are also the idols of Ganapathy, Lord Ayyappa and Edathedathu Kavil Bhagavathy. Renowned for its healing powers, people make an astonishing range of offerings here to the Lord. One of the most popular offerings is the Thulabharam, where devotees are weighed against bananas, sugar, jaggery and coconuts equivalent to their weight.

The Sreekovil The Sreekovil or the Sanctum Sanctorum is designed in two layers with copper sheet roofing plated with gold. The deity is in the traditionally orthodox form of Mahavishnu, with all the compliments - four arms each carrying sankh (conch), chakra (wheel), gadha (club) and padma (lotus). The Moolavigraha (main idol) is made of Pathalanjana Shila and is considered extremely sacred. There are two more idols one of silver and the other of gold of which the silver idol is older. These are used for the seeveli and other processions. Generally, the gold idol is used and the silver idol which is older is taken out only for Arattu and on a few special occasions. There is a repletion of traditional mural paintings on all the three sides, depicting sequences from puranic tales and Krishnaleela.

The old doors of Sreekovil are replaced with a new set secured with gold plated bars and embellished with golden bells. There are 101 bells, all made of silver and plated with gold.

Sopanam, the steps leading to the Sreekovil, are made of stone with carvings and designs of attractive craftsmanship.

Normally there are five poojas and three circumambulatory processions called Sreeveli, propitiating the celestial deities and carrying the Lord’s Thidambu on elephant’s back. During the days of Udayasthamana Poojas, there will be a total of twenty one poojas.

Special Offerings  Special offerings at the temple include Udayasthamana Pooja (pooja conducted from dawn to dusk) and Krishnanattam that need to be booked in advance. Krishnanattam is a performing art that combines both piety and art.

It is based on a Sanskrit work ‘Krishnageethi’ written by Manavedan Raja, a Zamorin king of Kozhikode, 350 years ago. The work includes eight phases of the life of Lord Krishna.

The devotees can select any story part to play as per their preference or the full story for nine days if they can afford it. Devotees believe that by offering ‘Avataram’ story, a child will be born to childless couples.

Museum There is a museum in the office Annex building at East Nada. Many rare offerings by devotees to the Lord are exhibited here. The museum is kept open from 8.00 am to 8.00pm on all days except Tuesdays and other holidays.

Melpathur Auditorium The spacious Melathur auditorium that can accommodate 2000 people is on the right side of the East Gopuram commemorates the great saint poet Melpathur Narayana Bhattathiri, who worshipped Lord Guruvayoorappan by composing superb devotional classic Narayaneeyam and miraculously recovered from an acute affliction of paralysis. Devotional functions such as spiritual discourse, performance of traditional forms, classical music and symposia on cultural and spiritual topics are held here.

The auditorium is given on rental for functions that are offered to Lord, like during Ashtami Rohini (August - Nov-Dec 2017 75 September), the birthday of Lord Krishna. The Sapthaham is conducted in such a way that the chapter of Krishna’s birth (Avatharam) is recited on the Ashtami Rohini day. The spiritual discourses are held during Vaisakha month (April - May), Ramayana Masa (July - August) and Mandala Pooja (November - December) the Melpathur Auditorium.

Parking Devaswom has provided parking facility on the East Nada and South Nada for the convenience of the devotees. The compound in front of the Kousthubham Rest House is given for parking at a nominal rate at East Nada. On the South Nada, the parking area of the Pay and Use toilet near the Panchajanyam Rest House is also provided for parking of vehicles.

Comfort Station On the eastern side of the temple tank, there is a comfort station which is functioning round the clock here. Pilgrims who arrive at odd hours and those who do not find or require immediate lodging/accommodation can keep their luggage at a nominal fee.They can use the lavatories and bathrooms. Also, there are lavatories on the north and south corners away from the Eastern Gopuram and Pay and Use Toilets at South Nada near Panchajanyam Rest House for the use of pilgrims. Special facilities for keeping the footwear and other articles are provided near the east and west side of the temple.