The Houseboat Pioneer of Allapuhza

The Houseboat Pioneer of Allapuhza 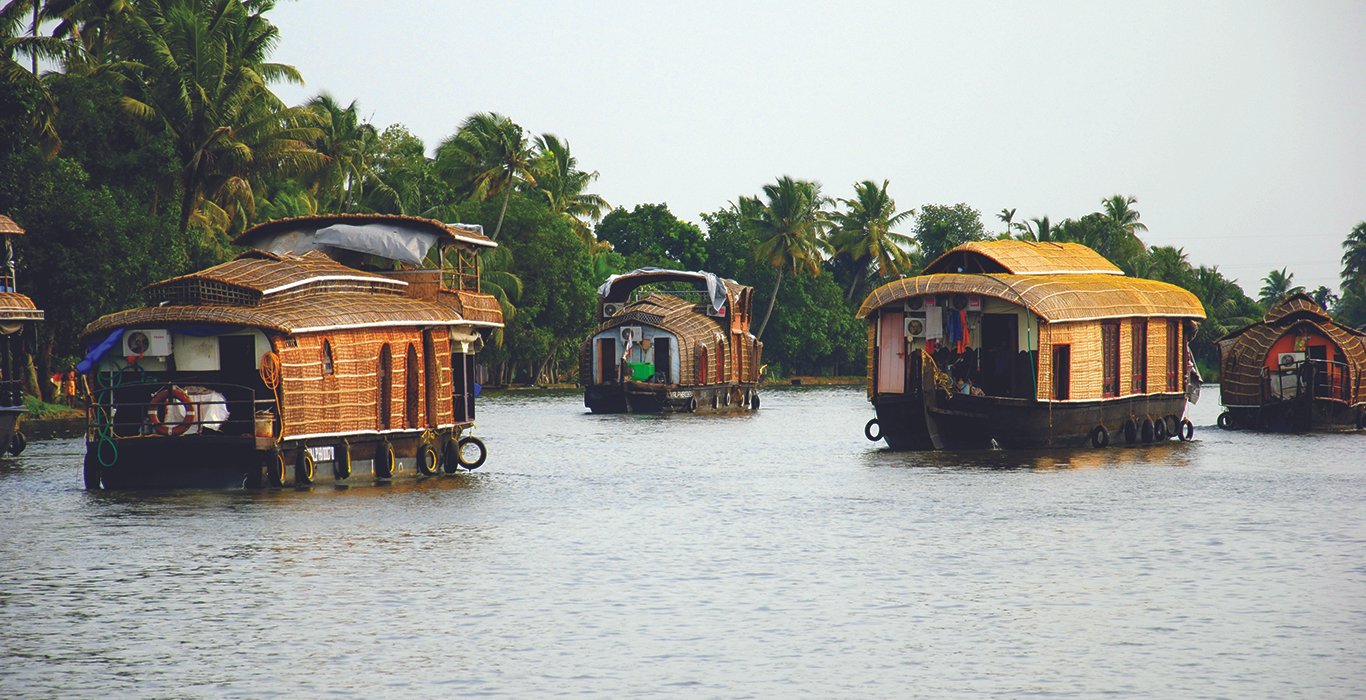 It is little wonder the backwaters of Allapuzha have earned a mention as one of the fifty destinations to be visited in one’s lifetime, by the National Geographic Magazine. Christened with the sobriquet of being the ‘Venice of the East, Allapuzha is balm to the soul with her winding canals, shimmery waters flanked by green foliage and the view of idyllic houseboats floating by. Sights of a Keralite life abound on the banks of the river with local women washing clothes and men in white mundu walking past.

Born in the village of Kuttanad, T G Reghu grew up on the banks of the Pookaithayar. Back in the days when most people traversed by foot to places near and far Reghu was faced with the challenge of travelling across the Pampayaar river for his further studies. The only mode of transport that existed then for him was the Kollam – Allapuzha boat service, which was sometimes irregular and hardly kept time, for it ran just once a day. This to-and-fro journey exposed him to the hardships faced by the people of his time, and also presented an opportunity for employment, and made him set up the Edakkadu Group of companies.

Reghu is the man who pioneered the idea of a co-operative society for houseboat owners and other stakeholders in the houseboat industry of Allapuzha. Reghu, who is the Secretary of ATDC is also regarded as one of the first few of his time to have commercialised houseboat cruises with the inaugural trip made on 15th November 1991. KTE caught up with a chat with this enterprising man from Allapuzha who owns a few resorts too apart from houseboats.

How did the idea of commercialising houseboat cruises come about? I used to travel long distances on foot and by boats for studies and so forth. During these journeys I would come across one or two tourists who had come to explore the place and would try to have a conversation with them.

I learnt about the difficulties they faced while touring the region. For us locals, since it is our own region, we know the place well and have resources, but for a tourist it is very different. Sometimes these tourists had to spend the night on these boats for lack of better options during nightfall. This gave me an idea and inspiration which later found life as the houseboat service I started in the year 1987 Kuttanad Travels” in Allapuzha. Initially the calls came from travel agents in Kochi and Hotels, who requested tours of a couple of hours, just to showcase the scenic beauty of Kuttanad. For this purpose we plied small motorized boats along the canals.

”Sometimes tourists had to spend the night on these boats for lack of better options during nightfall. This gave me an idea and inspiration which later found life as the houseboat service.”

But I soon realised that the scarcity and unavailability of boats often made planning such tours a challenge. Not the one to give up on a challenge, I figured that it would be advantageous to get other operators to tie-up with me, to ensure healthy business for me and others. Thus, in 1987, the Allapuzha Tourism Development Co-operative Society was formed and started functioning out of the Karthika Tourist House.

The first trip that was organised from Allapuzha to Kollam in the year 1987 had only 3 European tourists on-board. The journey which spanned eight hours was priced at Rs 1250, but after accounting for all the expenses, the income that arose, was hardly anything to survive on. But, the trip was planned in such a way that the iconic spots of Kalloorkadavu Church, Chundan Vallam, Pallana Kumaran Asan Memorial were covered and was meant to promote the Kuttanad region, along with Chambakulam. Slowly, the word spread and the number of tourists gradually increased.

We have heard about this iconic rally of many elephants, can you tell us something about it? ATDC worked incessantly to promote Allapuzha Canals and in August 1989 a rally of 51 elephants were held on the eve of the Nehru Trophy boat race, from the recreational ground to Municipal Stadium, marking a milestone in history. The rally was inaugurated by the WWCentral Tourism Minister who presided over the function.

P.S. Srinivasan, who also happened to be there then, was so pleased with ATDC programmes that he initiated the steps to form Tourism Promotion Councils in all districts and thus DTPC was formed in every district. The Tourism council continued to conduct the elephant exhibition for 10 consecutive years at important locations, after which it was discontinued, when it was felt that the desired objectives of the promotion were achieved. ATDC has also initiated many festivities and functions, which later served as precedents for the State Government to make those a regular feature in Kerala’s tourism calendar.

“ATDC has initiated many festivities and functions, which later served as precedents for the State Government to make those a regular feature in Kerala’s tourism calendar.”

Through conversations with tourists I was able to understand their expectations of the backwater cruises. During that period tourists used to be taken to Vembanad Lake on tours named “Full Moon” ,”Before Moon”and “After Moon” depending on the phases of the moon. Realising the attraction of the journeys and the potential market for this a small promotional work was doEWne at Thiruvananthapuram and Kovalam too. A chance meeting with ‘Tour India’ operator and owner Babu Verghese led to the purchase of a Kettuvallam for twenty five thousand rupees from Karunagapally. The 40 odd tourists who used to come in these Kollam- Allapuzha boats used to be shown the “Kettuvallam” which they would in turn photograph. These photographs found their way to various publications and that gave us immense publicity and tourists from many European countries began coming directly enquiring about these boat trips.

Any challenges you have faced? I travel all over the country for promotional purposes and I make it a point to attend these trade and tourism fairs. In 2000, I travelled with friends to attend a tourism fair in Bombay where I was forced to vacate the hotel for wearing our traditional mundu attire. Forced to find alternative accommodation that night, I had to travel several kilometres to find an alternate place to stay. These are just some of the difficulties I have faced along the way. But, I would like to believe that it is all for a good reason, because after many hardships the houseboat tourism which started on 15th November 1991 has grown to 1200 boats and 25,000 people employed in this industry. Around 10,000 families are finding livelihood in some way or other being associated with it.

“The houseboat tourism which started on 15th November 1991 has grown to 1200 boats and 25,000 people employed in this industry. Around 10,000 families are finding livelihood in some way or other being associated with it.

Do you have any message for the youth of today? To bring tourism industry to the level of lakhs of people getting jobs, we have to work together by keeping in mind the protection and conservation of nature. This way we can strive to upgrade Allapuzha to become one of the most sought after tourist destinations.