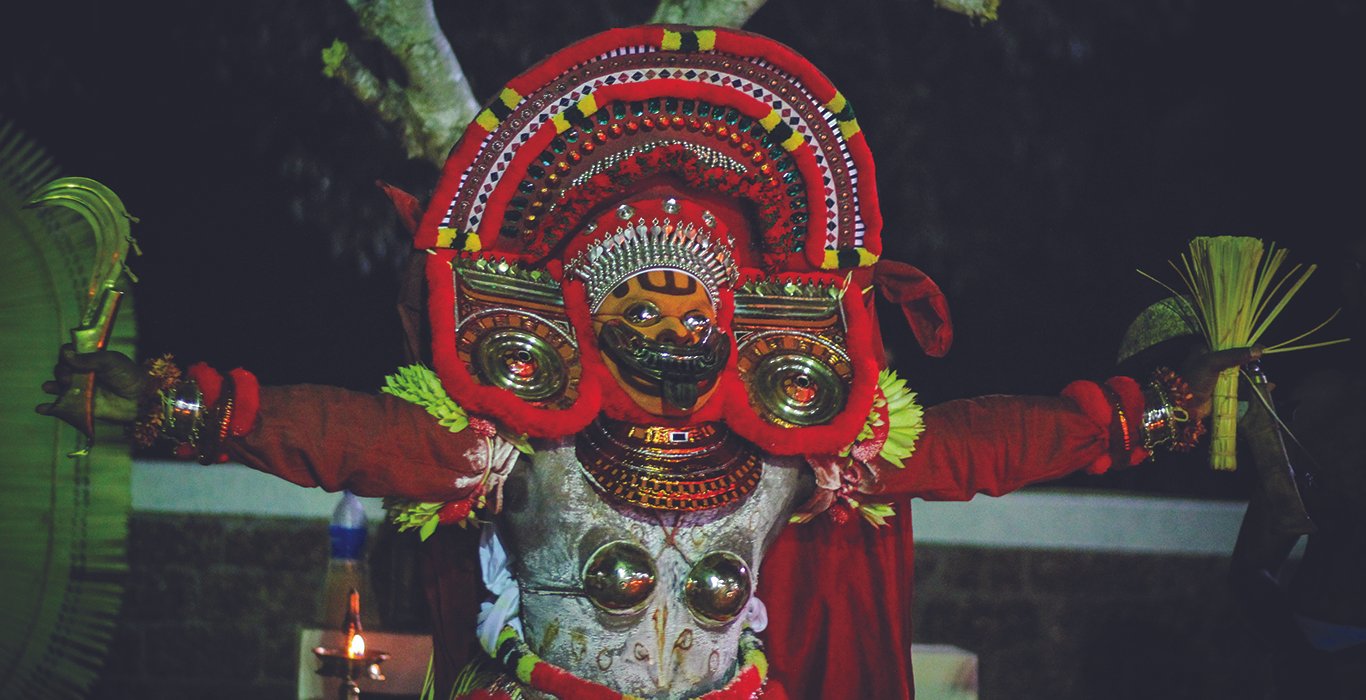 A glimpse of the divine

In God’s own country, the Gods come to life in the many art forms found throughout the land and one of them is rightly ‘Theyyam’ or the “Dance of the Gods” as one can loosely translate it. A socio-religious ceremony ‘Theyyam’ attributes importance to worship of ancestral spirits, gods, goddesses and heroes of bygone eras. Every Theyyam performance embodies an aura of divine splendour and is accompanied by rituals and other devotional hymns. The Theyyam period is observed with much fervor throughout Northen Kerala where the ritualistic dance form is predominantly found.

Theyyam is a ritualistic art form where the performer is adorned in elaborate and meticulously crafted costume and the performances are mostly held in the sacred groves of the temples popular for their Theyyam performances.

The word ‘Theyyam’ has been derived from ‘Deivam’ which means God. Being a ritualistic art form it involves many traditions and customs that easily date back to thousands of years. What makes Theyyam unique is its non-discriminatory spirit, that which accepts with open arms people from the Brahmanical upper caste as well as the lower-caste tribals who enjoy prime positions in this form of worship.

It is of little surprise that the Theyyam period falls within the 10th Malayalam month Thulam (falling between October and November) and coming to close by the middle of Idavam (Malayalam month corresponding to mid-May/ mid-June). This is also when the rains have receded and the ac-tivities around the year’s harvest have finished and preparations are afoot for the next season. The period of Theyyam, thus, becomes the time for prayers for a good harvest in the oncoming year.

When Man Becomes God People from these regions revere the Theyyams as Gods themselves believing that as man assumes the form of God and dances appeasing them, the Gods in return, confer their blessing upon them and the land assuring peace and prosperity for all.

The ceremonial dance is an enthralling performance one should not miss given the chance. Each dance is accompanied by a medley of musical instruments such as the Chenda, Elathalam, Kurumkuzal, and Veekkuchenda and follows its individual style of choreography and music. Everything related to the Theyyam performance is treated with utmost respect including the artist and his costume. A large part of the costume and headgear is made with coconut sheaths painted in striking contrasts of red, black and white. The skirts of the costume are fashioned out of coconut fronds and face of the artist is painted with intricate designs which are immersed in rich symbolism.

While Theyyam performances may be found in many places, there are many temples that are still revered for their enactment of Theyyam. Performed in the customary sacred groves in the vicinity of temples, most forms of Theyyam, are witnessed once a year while ‘Perumkaliyattam’ is performed once every twelve years or more.

While there exists over 400 varieties of Theyyam each replete with its own style of music and mime some feature regularly and are widely performed and well known such as:

Sree Muthappan Theyyam- This is performed year round whereas the Theyyams are performed seasonally. There are many Muthappan temples in North Malabar with each having a story of its own. Among the many Muthappan Temples, Kunnathur Padi and Parassini Kadavu are the famous ones

Padikutti Amma Padikutti Amma, believed to be the mother of Muthappan attained the status of Goddess when Muthappan became a God. Padikutti Amma theyyam was performed in the famous Palaprath Temple in Kodallur, located near Parasinni Kadavu, which is now famous for its performances of the particular Theyyam. The Sree Padikutti Mahadevi Temple is a famous temple in Eruvessi dedicated to Padikutti Amma.

Guligan In every Kaliyattam or Theyyam, the performance of Guligan is never missed. Guligan is believed to be a form of Yama, the Hindu God of death. The Guligan Kavu situated at Nileshwar, more popularly known as Benganakavu is worshipped for its immense power and the prosperity of the people in the neighboring places is attributed to the blessings of the Guligan. Scriptures credit Guligan as the most important warrior of Lord Shiva and much feared by all. The intricate dance steps of this Theyyam stand apart from the rest. It is believed that Lord Shiva’s consort Parvati had once expressed her fear of Guligan, enraged by the revelation Shiva threw Guligan to the ground and this scene is enacted with much vigour during theTheyyam.

Perum Kaliyattam In some Kavus, the local shrine, Theyyam is conducted in an interval of 12 or more years and are known as Perum Kaliyattam. In 2008, Perumkaliyattams were held in many temples such as Ramanthali Muchilot Kavu, Kalayikode Muchilot Kavu and Mandur Padinjatta Thiruvarkat Bhagavathy Temple

Agni Kandakarnan This Theyyam is usually performed at the Swami madam in Kannu Veedu Kapapuram in Kasargod and is performed during the early morning hours. In this form of theyym lighted torches are tied to the waist of the performer. One can also see this theyyam at the Pattare Sree Paradevatha Kshethram in Kozhikode during March.

Manakkott Amma Manakott is the name of a powerful Nair clan and legend goes that there once lived a woman from the family who challenged the then prevalent caste lines by drinking water from a pot made of areca nut leaf used by an outcast. Humiliated by this incident, the family killed the woman who also happened to be pregnant. It is said the murder of the young pregnant woman caused much havoc and ill-will within the Tharavadu leading to its downfall. The villagers concluded that the woman must have become a Goddess and named her Manakott Amma. The theyyam in her honor is performed every year in the Vairajathan Temple in Nileshwar in the month of April.

It would nearly impossible to list all the different Theyyam performances but one can be sure that in a land that is beautifully brimming with legends and lores, theyyam brings to life, even if only for a brief period, the world of the divine. Every Theyyam performance, carefully passed down generations, with its stories of valor and mythical tales of the Gods woven together with its music, mime and dance will always be an experience never forgotten.